Every fairy tale eventually comes to an end, and so our adventures move on to the next world. It's a familiar world, an enchanting starscape under the watchful eyes of an inscrutable pantheon. Buckle up, everyone. We're headed back to Theros. Let's look at the new and returning mechanics that await us.

Up until now, there's been a pretty reliable barrier between the world and the underworld. Beings that died tended to stay dead. But the set is called Theros Beyond Death after all, and that barrier ain't what it used to be. This new porous afterlife sets the stage nicely for escape, a new keyword that gives the dead another chance at life. 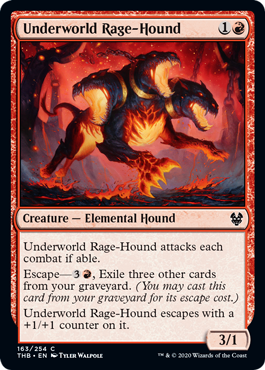 If a card with escape is in your graveyard, you can cast it. Escape provides you with an alternative cost with two components: an amount of mana you'll have to pay and a number of other cards you'll have to exile from your graveyard. Escape doesn't change when you can cast the spell. Instants with escape are good to go anytime; the other card types can be cast only during your main phase when the stack is empty.

Casting a spell using escape doesn't change any of the normal rules for casting a spell. The spell goes on the stack. It can be countered or otherwise responded to. Its converted mana cost doesn't change—it's always based on the mana cost, not the escape cost.

When an instant or sorcery spell with escape resolves (or is countered or otherwise leaves the stack), it returns to its owner's graveyard. Permanent spells with escape that resolve head to the battlefield, but if they die later, they'll head back to the graveyard. Don't tell Erebos, but cards can escape over and over again throughout the game as long as you have enough other cards to exile and mana to spare.

A few creature cards (like that good boy Underworld Rage-Hound) have abilities that say they escape with a number of +1/+1 counters. This just means that if you cast them from your graveyard using the escape ability, they'll enter the battlefield with that many +1/+1 counters.

The gods of Theros, much like gods on countless other worlds, enjoy the simple things in life. All they really want is to be adored, loved, worshipped, respected, feared, adulated, revered, hallowed, and generally thought of nicely by the populace. They're all about devotion, which makes the devotion mechanic a natural fit for a return in Theros Beyond Death. 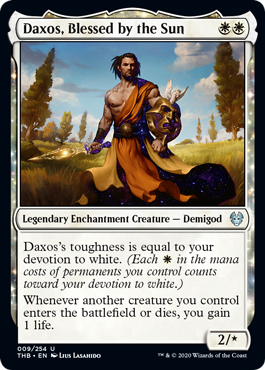 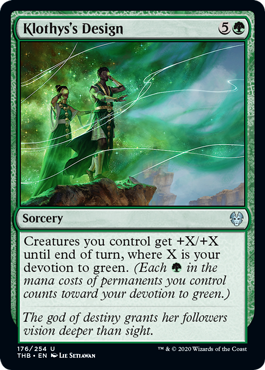 The bonus is calculated as Klothys's Design resolves. This means that anything that happens in response could cause you to get a different bonus than you were expecting. Once the spell resolves, it won't matter if your devotion to green changes. The bonus won't change.

Our first foray to Theros a few years ago revealed much about Nyx, the starry realm of the gods. The pantheon is connected to enchantments, and the returning ability word constellation rewards you for making enchantments the stars of your deck.

As an ability word, constellation doesn't have a specific rules meaning. It's used to shine some starlight on abilities that trigger whenever an enchantment enters the battlefield under your control. Each constellation bonus is different. 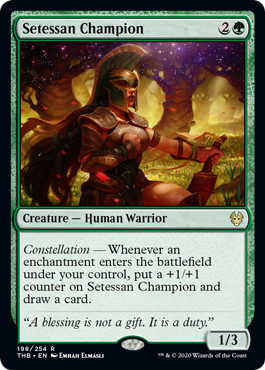 Sagas are enchantments that tell epic stories, one chapter at a time. They first appeared in Dominaria and make an epically fitting return in this set. 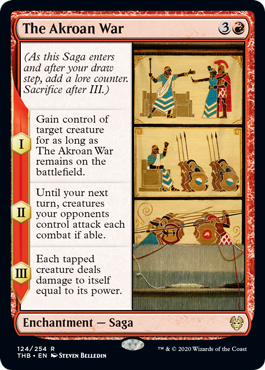 If you're not familiar with Sagas, here's how they work. Each Saga has a number of chapters (usually three, but don't be, you knowshocked if a set inspired by ancient Greece had some unusually long stories), each with an associated ability. The abilities typically play out one per turn until the story is complete and you sacrifice it. It's just like the library, but with fewer late fees and more sacrificing and bloodshed.

You keep track of what chapter you're on using lore counters. Sagas enter the battlefield with a lore counter on them. As your precombat main phase begins (meaning just after you draw for the turn), you add a lore counter to each Saga you control. Adding lore counters in either of these ways doesn't use the stack.

Theros Beyond Death, coming to your polis very soon. We'll see you at the Prereleaseand beyond!