oday's article is another in Level One's ongoing discussion of card advantage.

When we left last Level One's restatement of the Philosophy of Fire we said we would come back to this edition and talk about this Standard sideboard superstar:

For a little more context, Staff of the Death Magus was a "surprise" four-of in the sideboard of Yuuya Watanabe's Grand Prix Beijing–winning deck:

What did we mean, though, when we said that Staff of the Death Magus is, more or less, always a card-advantage machine?

Such a claim might have seemed a mite surprising to some or even most of you. Staff of the Death Magus doesn't talk about drawing cards like Divination. It doesn't remove multiple threats with a single swipe of cardboard like Supreme Verdict. It doesn't force the opponent to discard multiple cards like Rakdos's Return. And as for a two-for-one? When we talked about two-for-ones a little while back, it was usually in the context of a card that did something extra in addition to being an offensive/defensive body. Staff of the Death Magus isn't even the body! What gives? Because there isn't much about "card advantage" on the card at all.

There is only one viable end goal in Magic; to successfully conclude the game before your opponent does.

A Red-White Burn deck, à la Watanabe's Beijing semifinals and finals opponents, could theoretically end games of Magic fairly quickly. Imagine one of these decks on the play, especially in a Temples-rich field like Standard, where many of the opponent's lands will be entering the battlefield tapped:

4 Shock 4 Chained to the Rocks

One of the things that is particularly prickly about a deck that directly exploits the Philosophy of Fire and its teachings is that it is very difficult for opponents to interact with, defensively. All the RW deck's creatures have haste, meaning they get in for damage even when the opponent has removal (at least when that removal is sorcery speed, like Supreme Verdict)... but most opponents will be hard pressed to deal with the burn cards themselves at all.

Have you ever tried trading a Dissolve straight for a Skullcrack? The Skullcrack is liable to "sneak in" in response to a Sphinx's Revelation. Answering cards that cost one or two mana with a three-mana counterspell is not a mathematically winning proposition. These decks have enough creatures to keep the opponent honest with removal... but those creatures will consistently get their 2 damage in before being answered. And a card like Chandra's Phoenix? It's coming right back, even if you spend a card!

Against an unprepared opponent, you might just get your 20 (or more) in unopposed. The opponent can't block a Toil & Trouble, can't Doom Blade a Warleader's Helix. 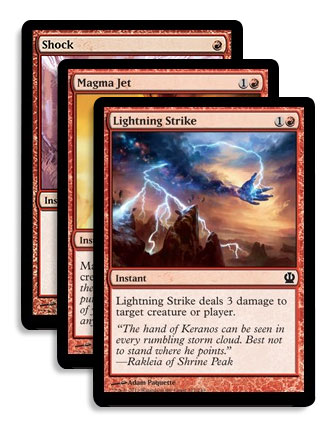 You typically sideboard Staff of the Death Magus into your deck when playing against red beatdown decks or RW Burn decks in Standard. These decks are, like Ge's, chock full of spells like Shock and Lightning Strike; or they rely on fast, hasty, offenses around Ash Zealot or Chandra's Phoenix.

These decks typically move to hit in fast, but disposable, bursts of damage. A Magma Jet might be hard to block (because, you know, you can't block it)... but once your opponent fires it off... that's it. Unlike an Ash Zealot, there is no additional 2 damage turn after turn for your two-mana investment.

This is what Staff of the Death Magus has to say about Magma Jet (or Shock) (or whatever):

You've just taken off half the text of one of those burn spells.

Just playing two Swamps (something your mana-hungry black control deck wants to do every turn, already) will essentially counter a Shock. You expend no particular resources (after investing in the Staff of the Death Magus, of course) and undo Shock after Shock; or, in the context of a Red deck, card after card. What else would you call that but card advantage?

Your opponent plays cards like Shock. When he or she plays a Shock, your opponent takes a card from his or her hand (where it can do all kinds of things depending on how the game plays out) and puts it into his or her graveyard (where it is unlikely to do anything, ever again).

When you have a card like Staff of the Death Magus you take a card like Swamp and put it from your hand (just like where your opponent's Shock started) and move it onto the battlefield. "Onto the battlefield" is much different than "into the graveyard." Over the course of the game, you will continually get more and more action from that Swamp. That Swamp—for no cost, after the initial investment in the Staff of the Death Magus—undoes half a Shock. Two Swamps? Any number of Swamps thereafter? More and more counter-Shock.

Further, any (black) spells we cast with Staff of the Death Magus on the battlefield have a similar effect. 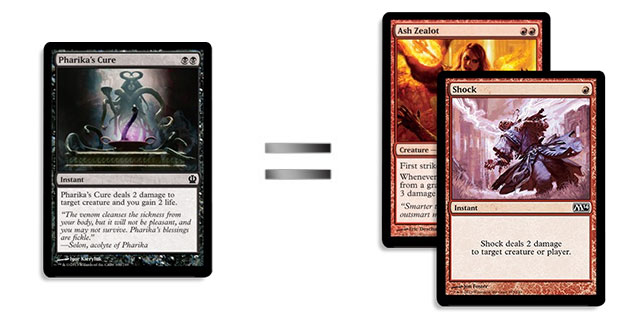 Every time you would snipe an opposing creature with Pharika's Cure, it was like you had a built-in counter-Shock.

You probably don't need me to tell you that Staff of the Death Magus gives many—or all—of a deck's spells a Pharika's Cure-esque upside. This is a powerful effect in and of itself, but having access to it makes you a more flexible player. Previously, Pharika's Cure would be played, which wasn't too bad... but it wasn't very flexible. Pharika's Cure was really only outstanding against one kind of deck, and even then it only traded with the small end of the opponent's suite. Now, every Doom Blade and Ultimate Price turns heads.

Heck, so does every Duress and Thoughtseize.

In his GP Beijing semifinal match with Ge, Watanabe had three copies of Staff of the Death Magus on the battlefield at one time. 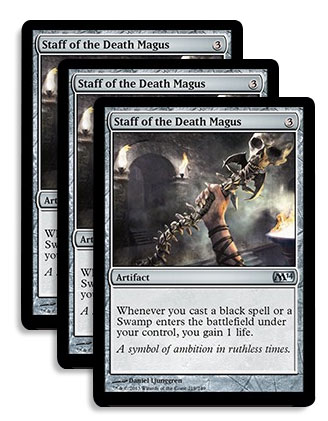 This is powerful Magic.

When the opponent plays with cards that are focused wholly on dealing damage, lifegain can potentially make for card advantage, so long as you are gaining more life than your opponent is doing damage, using a similar base of resources.

Of course, it's powerful Magic only against certain opponents, which is why we play Staff of the Death Magus in the sideboard against decks with Shock (and cards like Shock).

Some big threats are not really concerned about you gaining 1 life.

Unlike Pharika's Cure vs. Ash Zealot, the original Alpha boons played a little too evenly...

The original Alpha "boons" each gave players three of something. The best of these was Ancestral Recall (which provided three cards); Dark Ritual has been restricted or banned in multiple formats due to its three explosive mana; Lightning Bolt is maybe the all-time best red card with its 3 damage (allocated flexibly); and even Giant Growth and its +3/+3 has seen play.

But the problem child of the five-card cycle has always been Healing Salve.

Healing Salve isn't a horrible effect in the abstract... it just isn't costed competitively, especially when compared with the other four Alpha boons. Healing Salve's 3 life isn't up to snuff against Lightning Bolt's (or even Giant Growth's) 3 damage, because gaining life, by itself, does not help you win the game.

The Philosophy of Fire is useful because it tells you that if you have ten cards of a particular stripe you win the game.

But just gaining 20 or 30 life doesn't do anything but prolong the game!

Imagine you are sitting there gaining life and gaining life... and the opponent plays something like Jace, Memory Adept. It doesn't matter how much life you gain.

Because of this, the useful guideline for playing any kind of lifegain card is that it has to be substantially overpowered relative to damage-dealing cards to be playable, at all. But given the right context, these cards can be all-stars.

What you really want to think about when evaluating lifegain cards is how good they would be when your opponent is not a Red Deck. Let's think about some historical examples:

Renewed Faith was cool because you rarely played it; sure, when you actually tapped three to play it, it would be three full counter-Shocks but usually it could be used to smooth the draw of a top-heavy and mana-heavy deck. Cycling Renewed Faith could help you draw into lands, which would help against control decks, not just attack decks.

Cards like Pulse of the Fields and Martyr of Sands could be renewable sources of lifegain that were difficult to impossible to interact with.

Martyr of Sands + Proclamation of Rebirth could set up a situation that most combo and control decks could never interact with, could not stop main deck, and could never beat. You might not win explicitly with these cards, but with the opponent pouring every resource into doing absolutely nothing against your Proclamation of Rebirth, you could usually find a spot once all your land was in play where you would find some way to win.

Creatures like Exalted Angel (especially the three → morph version) and Baneslayer Angel (once called "the strongest large creature of all time" by Hall of Famer Brian Kibler) were burly, relatively durable, evasive racers—lifegain or no. Because they cost relatively little compared to their size and flying impact, these cards would often vanquish opponents without ever being blocked.

Loxodon Hierarch was widely considered the best card in both Block Constructed and Standard for going on a year. It hit a nice cross-section of the Venn Diagram, an efficient 4/4 for four mana (with an extra ability) and was hell against Red Decks. If you consider it might take two Shocks to get one out of the way of an attacker and that the lifegain was worth two more Shocks? Poor Red Deck. Loxodon Hierarch was kinda sorta a four-mana green (and white) Opportunity.

If a player had a fourth land in hand, Congregation at Dawn was just about the worst thing a Red Deck player could imagine—essentially unbeatable in Standard.

Context is the key when translating lifegain into a kind of card advantage. Your opponents must play on an axis where damage matters to them in terms of winning the game, and your lifegain abilities must, on a card-for-card basis, compare favorably against the opponent's nonrenewable damage sources.

Hopefully, this article has given you some good examples of those kinds of cards, so you can identify and choose them, when appropriate, in future.