"Most playable four-mana spells can win the game themselves."

e left "[Common] Casting Costs" with the notion, first popularized by Hall of Famer Zvi Mowshowitz, that most playable cards can win a game of Magic by themselves. This doesn't mean, necessarily, that a card says "win the game" explicitly... but good cards that cost four or more will often effectively end the opponent's dreams—even if it takes a while, or a circuitous route.

A four-mana sorcery that destroys all the creatures in play can put serious hurt on a creature deck... not to mention netting quite a bit of card advantage.

Whip of Erebos... Erebos, God of the Dead... Chandra, Pyromaster... you can probably rattle off a list as long as your arm of four-mana spells capable of winning games on their own. We already know that good four-mana spells are often very good.

This is an article about more expensive spells; that is, largely more expensive than four mana. Which are the ones worth playing? When should you play them? How do they differentiate themselves from cards that "merely" cost four—that are already at the end-point of what should be capable of winning the game?

Time is of the Essence

The arrogant Edgar, with his mitts full of Supreme Verdicts, never really got to cast a card. Edgar was overwhelmed—and overwhelmed early—by Gabby's onslaught of Tormented Hero, Thrill-Kill Assassin, and Lifebane Zombie on curve. Despite having a card that was tailor made to trump small-creature assaults.

Playing four mana cards at all—even when they theoretically serve an important function (like blowing up all the creatures against a creature deck)—must be done with strategic intent.

When considering an expensive spell, ask yourself this question:

Can I even get this [X-mana] card off before I lose the game?

This is an important consideration when you remember that there is only one viable end goal in competitive Magic .

And cards even more expensive than four mana?

You really have to pay attention to the speed of a predictable game!

You are going to have to play cards that are capable of either slowing down the rest of the room to your speed... or cards that bring your expensive spells up to the speed of the format.

4 Recurring Nightmare 4 Survival of the Fittest

1 Spirit of the Night
53 Cards

Brian Selden won the 1998 World Championships with cards like Spirit of the Night and Verdant Force in his seventy-five. This might be remarkable in and of itself, but it is even more so considering the enemy of the day.

Selden was playing in a Standard format where opposing Red Decks could play a fast 2-power creature on turn one... and then follow up with a Wasteland, keeping their opponents at one—or even zero—lands.

Red Decks of that era were not only very good at getting their one- and two-mana cards up and running themselves, but quite capable of keeping their opponents from casting powerful spells before they were buried in beatdown and burn.

So how did Selden survive not just long enough to get to Spirit of the Night... but get there over and over, up through the Swiss, then through three near-lethal Top 8 matches to be crowned the World Champion?

Selden used cards like Wall of Blossoms to slow the opponent's beatdown to a standstill. Not only was Wall of Blossoms a superb defensive card (good-sized blocker with a built-in route to drawing extra cards), if the opponent chose to follow up a Jackal Pup hit with a Shock, he or she would not only commit mana for the turn, but concede card advantage to Wall of Blossoms's two-for-one.

For its part, Wall of Roots didn't just function with defensive redundancy to Wall of Blossoms... but it helped produce mana, as did Birds of Paradise... and in a way, so did Recurring Nightmare.

Imagine Brian was being attacked by a Jackal Pup, but on turn two, tapped his Birds of Paradise for

to Firestorm the offending attacker... specifically by discarding Spirit of the Night.

He would slow down the opponent's forward-moving damage, get a little damage in himself, and also set up for a big play.

Brian could have then played Recurring Nightmare to exchange the Spirit of the Night in his graveyard for the Birds of Paradise in play and start getting in.

While some formats—like the ones with aggressive one-drops and Wastelands—start out very fast (hence, are fundamentally hostile to decks playing expensive cards) others, by default, play medium-to-large spells, setting a slower bar. Decks with five- and six-drop creatures (at least, those that get cast fair and square) tend not to win at a breakneck pace, so formats populated with these kinds of decks give you time to develop, build mana and resources, and get not just "big," but bigger.

Polukranos is a great creature—a baseline body that would make Juzám Djinn wince, with a substantial upside ability rather than a recurring downside every turn.

As a (1) large creature for a very reasonable cost that can (2) eliminate opposing creatures with a tap of a few lands, Polukranos, World Eater is the definition of a four-mana card capable of winning a game on its lonesome.

Top of the curve?

The RG decks that play Polukranos, World Eater do not typically top up on even this awesome threat. They very typically play even more expensive cards, such as Arbor Colossus or Stormbreath Dragon.

Like Polukranos, World Eater—a 5/5 for four mana—Arbor Colossus punches above its weight. A 6/6 for five mana, Arbor Colossus rounds out this monstrous trio with the ability to shoot Desecration Demon straight out of the sky with its special ability... not only with no loss of card advantage, but while gaining size!

Wow at four. Wow twice over at five (and especially in the case of Arbor Colossus) and a very good example of why you might invest in five mana to feast on an opposing four.

Polukranos, World Eater; Arbor Colossus; and Stormbreath Dragon have many things in common. They are solid, powerfully built creatures that are mana efficient relative to their—admittedly pretty thick—casting costs. They all have the monstrous ability.

And they are all big to begin with. 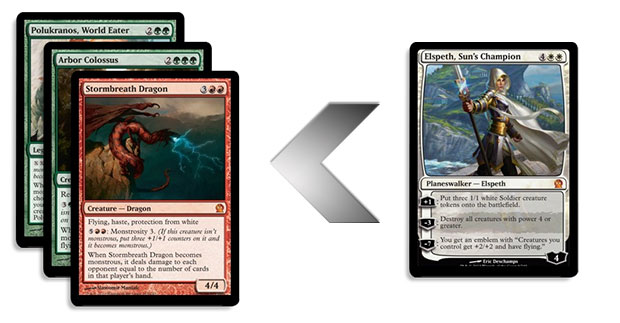 Just as Arbor Colossus is a great investment of five—even eleven—mana to trump Desecration Demon, Elspeth, Sun's Champion is a great reason to invest in six.

The ability to beat up on large creatures—no matter how many of them there are on the battlefield—can be a compelling incentive to lay out six mana in a format with extraordinary (and already expensive) four- and five-mana spells.

In another iteration of Standard—say, one where creatures top up on 2/3 Thrill-Kill Assassins or Nightveil Specters—which would presumably come hand-in-hand with Duress, Thoughtseize, and Hero's Downfall... Elspeth, Sun's Champion might be much weaker. There might be many looks for a black deck to rip Elspeth out of her owner's hand inside of turn six; and once she hit the table? Hero's Downfall makes for the perfect solution. Heck, in such a Standard, the five-drop of choice might very well be a 2/4 common.

When going bigger, you necessarily have to have the context of what "bigger" means. Because the goal of most competitive games of Magic is to successfully conclude before the opponent does, playing big five-, six-, even seven-cost threats rarely works best in the abstract. If you are going to go big, it is important that you pick the right expensive spells to deal with what is likely to show up on the other side of the battlefield, so that you actually get faster (probably by slowing the opponent down)... rather than starting off at a slower pace, yourself.

Playing expensive spells isn't just about metagames that give you enough time to develop like a Standard where opponents summon four- or five-drops.

Playing expensive spells isn't just about slowing down opponents with blockers to steal time to develop, if that time doesn't come for free.

Sometimes, playing expensive spells is about grabbing the opponent by the lapels and imposing your will on the very rules of Magic: The Gathering. 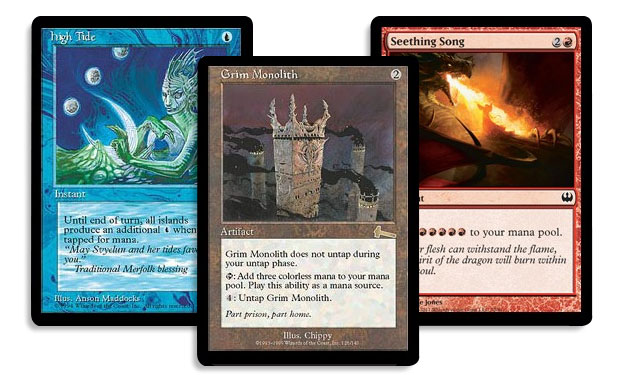 Explosive mana engines can race even the fastest beatdown decks.

High Tide decks could race Red Decks by winning on the third turn! And after a Time Spiral resolved, each of those untapping lands could produce a further

You could play a Grim Monolith on the second turn, then play a third Island. Tapping two Islands and the Grim Monolith could produce the mighty Morphling on the third turn, with

open to defend it from removal!

In some formats, even fast Red Decks could get into the expensive spells game! If you couldn't handle a beatdown opponent's third-turn Arc-Slogger, it was probably going to kill you the next turn.

Arguably, the biggest incentive to playing expensive spells in general is that they win the games not just conceptually (the way we say four-mana spells are generally supposed to be able to)... but that they actually just win the game on the spot.

When Kiki-Jiki starts tapping to make extra Pestermites, he starts untapping for another go 'round right away. Take infinite.

Don't let Primeval Titan attack! Whether this creature is setting up Kessig Wolf Run or Valakut, the Molten Pinnacle, it has proved the scourge of both Standard and larger formats, often winning in just one or two turns.

How long can you deal with an opponent drawing—and casting—his or her best card, every turn, for the rest of the game... for free?