Why would I possibly want to blow up all my own creatures?

hat's what I was thinking, something like twenty years ago, the first time I saw this card:

Those of you who think about winning a game of Magic, and equating that with some kind of dominance by big creatures (or sneaking little creatures in) might be thinking the same thing, to yourselves, right this second.

What I can tell you is that for my part, way back when, I didn't have any frame of reference for how to win a game, other than by creature attack. Worse yet, I was just then beginning to understand synergistic strategies... like that if I started the game with a Llanowar Elves, maybe made my card selections redundant with Wild Growth or Fyndhorn Elves, that I could get my Craw Wurm out—and ready to rumble, red-zone style—well before the upper-right-proscribed turn six.

Now, if the big way I was planning to dominate my local kitchen table was by speeding out big creatures with little creatures...

Why would I possibly want to blow up all those creatures, little and big together?

It was a crazy thought!

Of course, it had not occurred to me that I might not want to play creatures at all.

Now, if you don't have any creatures in play, at least at the time; or perhaps you are playing a deck like The Deck, which is strategically and selectively creature-poor, your downside might not include getting anything blown up at all. 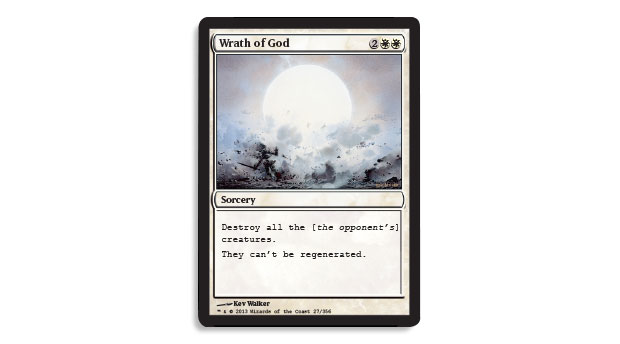 A much better deal.

Put a different way, your opponent may have tons and tons of materiel on the battlefield—and you might not have any creatures on your side of the battlefield—and that might not necessarily mean that you are "losing" or have done anything wrong. When you play a game this way, a card like Wrath of God, rather than being framed as something that blows up all your own creatures, becomes a source of card advantage.

And of course, over the years, Wrath of God has been—as a Magic card—the recipient of R&D's sincerest form of flattery, over and over again:

As well as, over and over, contributing to wins in all manner of formats. A true pillar of the tournament game.

Or maybe you only have one creature, but it's a really, really good creature... and I have a bunch of creatures, but I am not going to win in time. Maybe your really, really good creature is a flier that is going to race me before my little guys catch up on the ground. I might not have much of a choice, if my only choice is between giving up card advantage or losing the game in its entirely. Card advantage be damned!

Or you might see situations where a single creature is so good that the opposing player is willing to spend four mana—and a card designed to wipe out whole armies—just to deal with the one creature. The finals of Pro Tour Yokohama saw eventual champion Guillaume Wafo-Tapa respecting Kazuya Mitamura's Shadowmage Infiltrator so much he was willing to spend four mana into Mitamura's three to go one-for-one on that exchange with Damnation.

Point being, far beyond the limitations of the 1994-me's philosophy of the game, there were both strategic reasons one might want to blow up all the creatures, and contextual reasons that came up in particular games—not the least of which is that "all" the creatures might belong to my opponent.

These are certainly legitimate concerns! Especially given the fact that when Heartbeat of Spring was printed, tapping out for six-mana Dragons like Keiga, the Tide Star was one of the main ways to win!

But the real question was whether or not the opponent could kill you.

Because, if you tapped out for Heartbeat of Spring, and he or she didn't kill you... but you could then play your next land and generate enough mana to kill your opponent... well that ended up being an advantage, didn't it?

The Heartbeat of Spring decks circa 2005 and 2006 came in multiple flavors. Where it might have been en vogue to make a Dragon, Heartbeat players would go completely over the top with Myojin of Seeing Winds or Myojin of Night's Reach...a mere Dragon was not impressive! These players knew what to do with their bigger casting costs! Others would use Early Harvest to abuse Heartbeat of Spring, cast all their cards in a single turn, and then point an Invoke the Firemind at the opponent's face. No, Wrath of God wouldn't have been good against these decks.

Symmetrical effects have been with the game from its inception.

And while, on their faces, they can pose difficult questions—like, why you would want to play one at all—a good number of these cards have gone on to both contribute to major wins (like Wrath of God) or define archetypes and eras (like Heartbeat of Spring, Howling Mine, Winter Orb, or Mana Flare).

Most players can grasp, reasonably quickly, the idea of the opponent having more creatures in play (or maybe even playing no creatures themselves) to incorporate a Wrath of God/Day of Judgment/Damnation/Supreme Verdict... but the ones that paralyze everyone's lands tend to raise more of an eyebrow.

Why would I possibly want to blow up all my own lands?

Or, "I get that I might not have any creatures out... but doesn't everyone have to play lands?"

The answer is more or less, yes. But clever players have continually had interesting solutions to the Armageddon problem.

The classic thug move was just to have an Erhnam Djinn in play.

If you had a burly 4/5 creature when you played your Armageddon... well, the opponent would be on a clock with no lands on the battlefield. The bet was you were meant to win from that spot. The opponent was certainly not going to be able to Wrath of God for a few turns! Also forestwalk, contextually enough, was not going to be a near-term issue.

The intelligent player would often pair Winter Orb with Armageddon—two different cards that put the hurt on both players' mana bases.

If you had even one Marble Diamond, you could operate reasonably well under Winter Orb. Your opponent, on the other hand, would be forced to play more and more lands to operate with anything costing more than one mana under Winter Orb... but you wouldn't. You could hold back lands so your eventual Armageddons were brutal. You could play post-Armageddon lands (and you would still have your Marble Diamond[s] to fall back on).

Maybe the most inventive solution was John Balla's from Grand Prix Las Vegas 2001:

Balla used Werebear as both a Marble Diamond and an Erhnam Djinn. To this day, Balla's deck might be the only notable tournament performer that got threshold without the use of blue cards and fetch lands. When he used Armageddon to blow up all the lands—including his own—that was how he got sufficient cards in his graveyard to power up Werebear!

Mayhap my favorite story of symmetrical effects—in this case dueling symmetrical effects—belongs to the legendary Jon Finkel, from a US National Championship he would eventually win. Jon's opponent had Mageta the Lion, or "Wrath of God on a stick," in the last round of the Limited portion. A continual font of the most powerful possible effect in a format that really was only ever won by creature combat... Mageta the Lion was about as powerful as it got in Limited.

For his part, Jon had Wandering Eye; far less powerful, but giving Jon perfect information of both players' cards. Because of this information, Jon was able to beat Mageta the Lion by making tight decisions in a truly wonderful display of knowledge and skill over raw power.

There are many cases where—even if they might cause your nose to wrinkle on first look—symmetrical cards can give you an advantage. Often, though, they will force you to make your deck a certain way or play a different way than on the usual script.

How about this symmetrical effect? 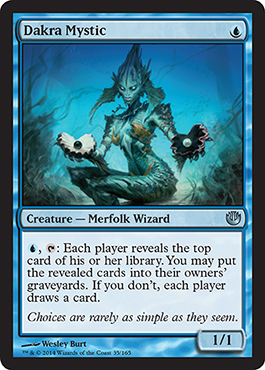 This is certainly a head-scratching, somewhat symmetrical card!

My guess is that highly skilled players (like Jon Finkel in the Wandering Eye story) will get more mileage out of the one-mana Dakra Mystic than the average mage.

My guess is that "Why would you want to do that?" (in reference to the mutual card drawing) is not the right question; the right question is probably "Could I reasonably be in the market for a one-drop blue creature that can do that?"

But this one-mana blue creature?

When would we want to (1) commit a mana as well as a card already in play to (2) [maybe] give the opponent a free card?

Hopefully, the earlier examples in this very article have helped arm you to answer that question.

Can we get an advantage?

If our top card is something awesome, like Thassa, God of the Sea, and the opponent's top card is a land... I am pretty sure this is a card we are willing to concede.

Is what we are getting worth a free card?

Successful Goblin Guide mages have conceded any number of freebie lands on top to get in 2 damage. The idea here is a similar one—We don't just give up a card, we gain information. Even better than with Goblin Guide, we don't actually have to say "yes" to the draw.

Can we form a plan?

Just as it was sometimes necessary to blow up our own creatures—even more of our own creatures—with Wrath of God to neutralize a smaller number of our opponent's threats in order to win, just as Jon was able to navigate the much more powerful Mageta the Lion with the knowledge gleaned from his humble Wandering Eye, Dakra Mystic may give us the tools necessary to win not just the exchange, but the game.

Might it stink to give the opponent something awesome like Blood Baron of Vizkopa when we are only going to get a land? Sure. But if we look at our hand and have a Dissolve staring back, we can probably imagine what is going to happen next. The opponent will tap five for the supposed bomb killer... and we Dissolve and set up the top of our deck. Sure, let's both draw. If we really want to be working our way through our deck—perhaps just hitting land drops when we already have cards in hand—the fact that we "lose" this particular exchange might not mean a whole lot to who will win the game.

Does it matter that this is a 1/1 creature that is going to demand mana from us, turn after turn?

I think this might be the most interesting question of them all!

1/1 creatures are about the most fragile ones we play in this great game!

I would just point to the long line of magicians who lost, leaving a trail of un-Disenchanted Howling Mines behind them. Those mages all thought the freebies from Howling Mine would give them more than enough cards to overpower their silly, symmetrical-playing, opponents; never considering that those opponents might have been asking all the right questions before giving away such obvious advantages.

Sure it will matter.

In lots of ways.

And the false sense of superiority that the opponent across the table feels might be the element that matters most.