Greetings, Magic players! It's been a while since I wrote an article, so please allow me to introduce myself. I am Melissa DeTora, a game designer at Wizards of the Coast working on Magic's Play Design team. My team primarily works on our competitive formats like Standard and Limited, but our main goal is to make Magic fun. Working at Wizards is a blast, and I am utterly grateful and honored that I turned my lifelong hobby and passion into a career.

For Kaldheim, I was a member of the Set Design team with Dave Humpherys as the lead and Corey Bowen and Michael Majors as team members. Today, I'm excited to preview a few cards from the set and talk about some of the mechanics and their roles they have in Kaldheim Limited and Standard.

The first card I'm going to preview uses the foretell mechanic. When we add mechanics to sets, we take many things into account. One of them is making sure we include mechanics of different complexities and for a wide variety of player types. For example, in Ikoria: Lair of Behemoths, we had a big flashy Timmy mechanic in mutate. That mechanic was carrying a lot of weight as far as splashiness and complexity was concerned, and we wanted to add a mechanic to tone down those things down and be a little simpler to play with. We added cycling to the set to fill that role. This type of complexity balance is something Magic designers are always thinking about when designing sets.

Foretell is our mechanic for the player who wants to prove they're the best (we refer to them as Spike). Foretell uses hidden information and bluffing, something that Limited players generally enjoy. Learning how to play around the combat trick your opponent is representing is one of the biggest lessons for taking your game to the next level. Unlike in most Limited games, where newer or more casual players can opt out of this type of gameplay, it's a lot harder to do if there's a face-down foretell card in play. Your opponent definitely has something under there. Is it a combat trick or a removal spell that could prevent you from making a lethal attack? Or is it a creature that they are choosing to keep face down for the ultimate bluff? It's got to be something, and you have to take it into consideration when deciding how to play your hand. 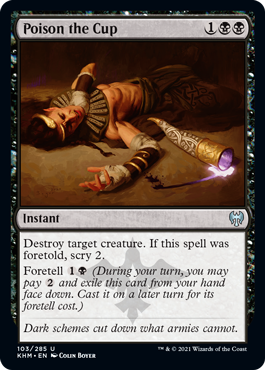 This card may remind you of an iconic removal spell in Magic's past. This card was originally submitted with the name Premeditated Murder, for the callback to that card. Later in the process, it got a more flavorful name for a Viking-inspired set.

As a mechanic for Spike, we wanted to create a feeling of cleverness by giving the player choices. With Poison the Cup, you have the option of spending your mana optimally by hard-casting this for 1BB or spending a little more over a couple of turns by foretelling it. The latter option also gives you the bluffing element, especially if you have several foretell cards out. Our goal was for there to be no clear best-use case for how to play with your foretell cards and to have the optimal play change depending on the situation. Having several options on a single card gives it a variety of play patterns from game to game, which is one of the most fun aspects of Limited gameplay.

For much of its lifetime, Poison the Cup didn't have the scry 2 rider. Here's the story about how and why we added it. We wanted foretell cards to have a meaningful choice of whether to foretell this at any point in the game. We did this in several ways such as by giving you a mana reduction if you foretell, by giving you some payoff cards that reward you for casting cards from anywhere other than your hand, and more. However, with Poison the Cup, the former was not true. It was one of the few cards in the set that cost more mana if you used foretell, and since it was already a cheap spell at its base and you couldn't foretell it if you wanted to cast it right away in your main phase, this card was getting foretold far less than any other foretell card. We wanted to do something about that, so we added the scry 2 rider to make the foretell mode stronger.

Our next card today doesn't have a mechanic attached to it, but it's an important role-player for Limited to activate graveyard synergies. That card isStrategic Planning. 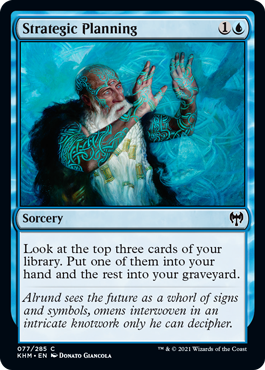 If you've been following previews, you may have seen that this set has a light graveyard theme. We're using the graveyard in a few ways. You'll see that both Black-Green Elves and Blue-Black Snow use reanimation (check out King Narfi the Betrayer), so you'll want to pick up cards that mill yourself to use those strategies effectively. We also have an unnamed mechanic in all colors that exile creatures from your graveyard for different effects, such as Dread Rider, a finisher for Blue-Black Control decks. This unnamed mechanic was originally named Pyre, but we ended up cutting the name as we cut down on the number of cards that used this ability and added the boast mechanic to the set.

As we were playtesting Limited, we were getting feedback that the graveyard synergies were too hard to use, especially in decks that didn't have early creatures to play or didn't have many creatures you wanted to trade off. With several "pyre" cards that you were usually looking to cast or activate on curve, it was mostly unsatisfying to play with them. It was important for us that our graveyard synergy cards worked well and were able to turn on even if you're not trading creatures in combat. We didn't really have self-mill in the set as of yet, and the few cards we did have were not always reliable. The Limited format really needed a spell at two mana that gave you creatures to exile right away. I suggested Strategic Planning to be added to the set because it accomplishes this goal while also being fun to play in Standard. We tried it out, it worked pretty well, and the rest is history!

Our final card today uses my personal favorite Kaldheim mechanic, boast. My favorite Magic format is Draft, and I love to figure out the best way to sequence my spells and use mana optimally, and boast is the mechanic that really tests your ability to do that. Boast is a "mana sink" ability, something that we try to include frequently at lower rarities to make Limited play out more smoothly. It's never fun to get mana flooded in any game of Magic, and the way we mitigate this in Draft is by giving you many ways to use your mana on permanents in play. The boast mechanic is one of these mana sinks.

My favorite thing about boast is that you can activate the ability any time in the turn as long as the creature with boast has attacked. This means you can wait to see how your opponent reacts before you decide if you want to use the ability. Boast creatures often provide card advantage so your opponent will usually want to get it off the board as soon as possible, and they will often make unfavorable trades just to keep you from boasting turn after turn. You can use this to your advantage by playing combat tricks or Equipment to make blocking worse for your opponent and giving you multiple turns of boasting. If your opponent chooses to do nothing, you can decide after combat if you'd like to boast or play more spells. Having these kinds of options in Limited is one of the things that makes it super fun.

Here's my last preview card, Usher of the Fallen: 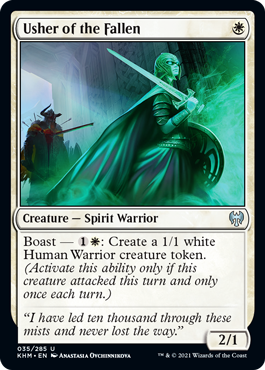 This card had a few goals. The first one was to be the premier one-drop white aggro creature for Standard. Elite Vanguard is often strong enough for Standard, but it usually needs a bit of upside to be competitive. A card like Venerable Knight felt right about on the line, so we wanted to make this one a little stronger to be a great option for White Aggro decks. This card also combines great with Rally the Ranks for your Standard Warrior decks.

Usher of the Fallen also plays an important role in Kaldheim's Limited format. The red-white archetype is an aggressive Warrior deck, and Usher can give you two or more Warriors for one card. If you're able to manage combat and your mana right, you can usually get more than a card's worth of value out of this, which is powerful for a one-drop.

Red-white's second Limited theme is Equipment. Being a Norse-themed set, Kaldheim is not short on swords and axes for your Warriors to wield. Equipment is often mana inefficient, especially at the common level in Limited. But combining Equipment with a one-mana creature with an ability that pumps out more creatures to put your Equipment on, this mana investment is often worth it.