I'll save you the Ctrl-F search: we say, "Historic Brawl," and there's a queue. And that's nowhere near the wildest thing happening in this release. Read on for details on that, Jumpstart: Historic Horizons, and more.

For several months now, we've been working on a large-scale change to our backend systems. This won't have much of an immediate impact for players, but it is a crucial step to help us ensure long-term stability for MTG Arena and maintain the ability to keep it supported and running well for many years to come.

Because of the size of this change, there will be a few differences that players will see with this release. First, we are planning about four hours of downtime—from 7 a.m. to 11 a.m. PST—on August 24 as we make this switchover. We will also need to disable starting new matches about an hour before this downtime starts, before bringing things back up when we resume.

Another effect of the change is that you will be unable to spend any Mastery Orbs from Strixhaven: School of Mages after this downtime, so if you've been procrastinating on finishing your studies, now's the time. (Spending Mastery Orbs from Dungeons & Dragons: Adventures in the Forgotten Realms will be unaffected.)

While we initially planned a split pair of August ranked reasons, our recent adjustment to this release means we're instead making the August 2021 a "Doubling Season" of rewards by combining both split seasons' rewards and Qualifier Weekend invitations. You can get the complete rundown in our announcement.

Additionally, given that this is such a major change to the internal systems, we may see more issues and surprises than normal with this release. Every release, we monitor our bug reports and social channels for any problems players run into, but for this one, we'll be stepping that up several notches. If you do run into any problems, please use the bug report link or contact customer service. We'll have the team on standby to make sure any issues get addressed and the patches flow quickly.

Return to the Ranks 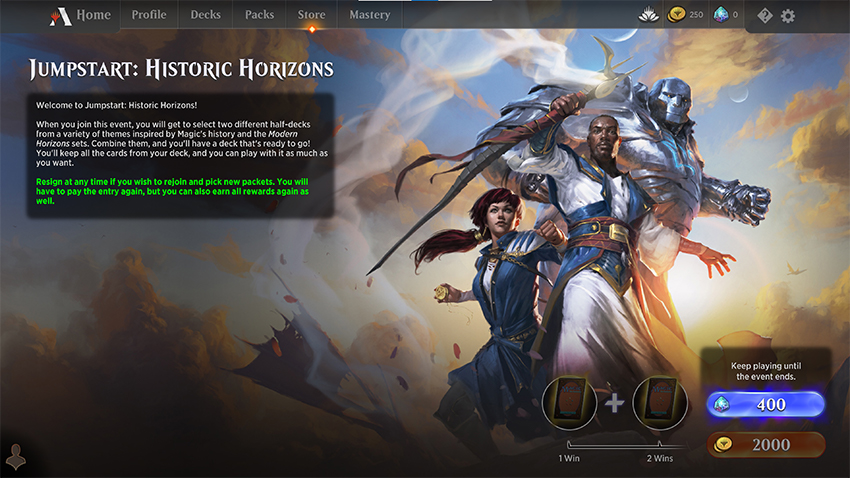 Overall, we wanted to ensure that players see more variety to keep the experience interesting and surprising. Multicolor packets have been added into the mix, so you can build more varied decks. Packet selection is more intelligent now, so when you are given your three options to pick from, you should get a good mix of colors with monocolor and two-color packets. We're also keeping track of all the packets you've selected to make sure that at least one you're offered is something you haven't selected in a past run.

There's more variety inside the packets as well. Where past runs of Jumpstart offered up to four different version of a theme, the packets in Jumpstart: Historic Horizons have variability built in, with multiple options for many of their slots. A single packet can end up with a dozen or more variations.

We've also made the mana bases smarter: lands generally don't live in the packets but instead are added after MTG Arena can see your whole deck. So, a mono-white packet like Legion mixed with a mono-black packet like Davriel would get a couple Scoured Barrens to smooth the mana base, but mixing Legion with another mono-white deck like Cycling wouldn't. Most of the combinations will also add some monocolor cycling lands into the mix for more flexibility.

You can read up more about playing with our dedicated Jumpstart: Historic Horizons article.

One of the key goals with Jumpstart: Historic Horizons was to pull large chunks of Modern Horizons and Modern Horizons 2 into MTG Arena and Historic. Obviously care needed to be taken here: tabletop sets designed for Modern will have many cards that would be too powerful when brought into Historic, so we decided we're not bringing in everything.

There are about 220 cards from those sets in the packets, alongside about 120 other new-to-MTG Arena "reprints" and about 400 returning cards already available on MTG Arena—all creating a massive card pool of more than 750 for these new packets. In a change from the prior Jumpstart, all returning cards that were already on MTG Arena are using their existing versions.

Adding all these new cards lets us bring in support for many new archetypes. We've already revealed some exciting additions like the first Ninjas and Slivers in Historic as well as mechanics like evoke and delirium, and we'll be revealing many more over the coming days. Keep up with all the new packets and cards as they're revealed with our dedicated Jumpstart: Historic Horizons packets article.

Bounty of the Deep

But it's not all reprints! Jumpstart: Historic Horizons also adds 31 all-new cards, and these are Magic's first cards in a long time that use digital-only mechanics. Since Historic is already a digital-only format, we're excited to expand the possibilities for Magic in that space as well.

There are three main digital-only mechanics in the set. 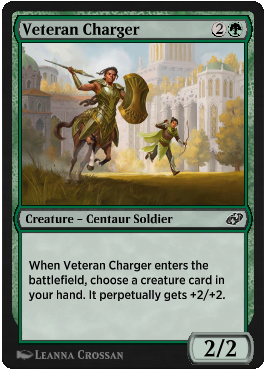 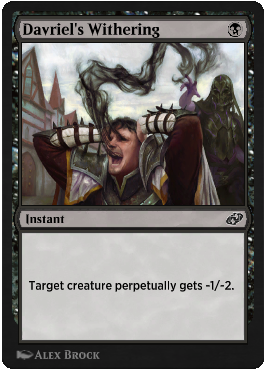 Perpetual is a digital-only modifier that can be applied to existing Magic rules. Put simply, perpetual modifications persist beyond zone transfers. It doesn't matter if a card is discarded, dies, bounced to hand, or even exiled and returned to the game later—perpetual effects last until the end of the game. 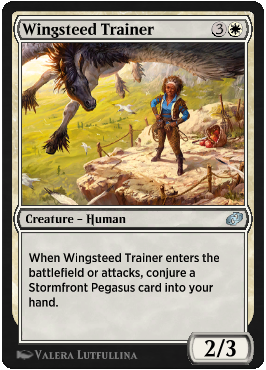 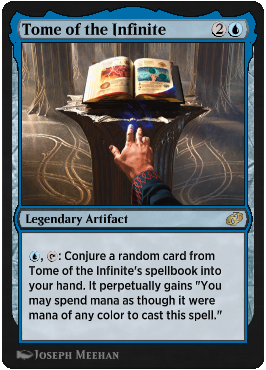 Magic players have been creating tokens for a long time, but Jumpstart: Historic Horizons lets you create honest-to-goodness cards. Conjure is a keyword naming a specific card and what is to be done with it. You might conjure to your hand, your library, or even directly to the battlefield, and once you do, the card is a full card for all rules purposes. At the end of the game, they vanish back to wherever it is they came from. 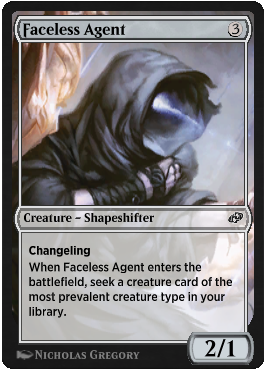 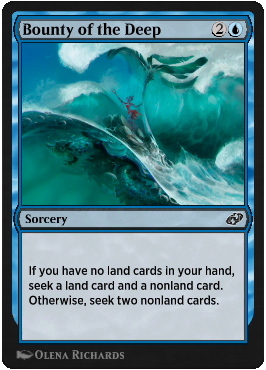 Seek is a streamlined way to get a card out of your library. It describes some specific quality or qualities of a card, then one card that matches those qualities will be randomly selected from your library and placed into your hand. No searching, no shuffling.

Jumpstart: Historic Horizons expands the Historic format in many new ways: new cards, new mechanics, and new digital-only possibilities. A lot of Magic's recent growth has come from building great new products for specific groups of players, and we're excited to explore more of what we can do for digital-first players.

Digital-only formats like Historic let us do things we can't do in formats like Standard that need to keep parity with the tabletop game. We know that some players want a faithful recreation of tabletop Magic, and Standard, as well as Premier Draft, on MTG Arena, and we will continue to provide that. And if you want to play with mechanics that can only work in a digital game, to explore the expanded design space this brings, Historic will now give you that chance.

For more info on this set, the design process behind it, and what this means for Magic's digital future, check out today's "Weekly MTG" for a discussion with Magic R&D and some of the designers behind the set. You can also find more info in our Jumpstart: Historic Horizons interview with IGN featuring Aaron Forsythe (VP of design for Magic) and me (Jay Parker, game director for MTG Arena).

Now, on to what you've been waiting for: with this release, we are adding a 100-card Historic Brawl queue. That's it. That's the update.

Like we do with Standard Brawl, we will be using a matchmaking system that takes into account the power level of your commander to help ensure that matches are fairer and more fun for both players. Speaking of fair, some perpetual effects (especially toughness reduction) can basically shut down an opponent's commander. Locking out a commander is why Meddling Mage and Sorcerous Spyglass are banned in Brawl, so we'll be taking a similar approach with some perpetual cards. We're starting with banning both Davriel's Withering and Davriel, Soul Broker in Historic Brawl, and we'll be keeping an eye on the rest of the effects in Historic Brawl.

This queue will be up at least until rotation this September while we monitor how interest and play volume hold up for the format. Our goal is to leave it up if it can remain healthy and provide enough population for rapid, fair pairing. If you want permanent Historic Brawl, play it!

We will continue to offer the Standard Brawl queue as normal, and it will stay a 60-card format as it is now. Also, if you've been worried about Command Tower and Arcane Signet rotating out from Standard Brawl in September, fear not—we'll make sure those staple cards stay legal in Standard Brawl on MTG Arena.

On that note, it's a good time to remind you that rotation and Renewal are just around the corner, arriving in September with the release of Innistrad: Midnight Hunt. When that set is released, Standard will consist of the Standard sets released from Zendikar Rising forward.

With this release, you'll see an in-game pop-up explaining a bit about rotation, as well as the Renewal egg in your profile. If you've logged in sometime before rotation, you'll have some fun Renewal surprises to enjoy when Innistrad: Midnight Hunt lands in September. We will also be adding notifications when buying packs or crafting cards from sets that will be rotating soon, in case you want to focus your collection on cards that will remain legal in the new Standard environment.

With this release we will also be adding the updated new player decks to all accounts, as well as any cards they include that you're missing. This ensures everyone will have fun new decks to play come rotation, even if you've been gone from the game for a while. Rotation is always a great time to come back.

And if you're super eager to get a peek at what the new meta could be like, the Standard 2022 queues are still around until rotation, where you can play with any cards from Zendikar Rising through Dungeons & Dragons: Adventures in the Forgotten Realms.

As you can see, there's a lot happening in our next release: a major backend improvement to keep MTG Arena healthy in the years to come, a huge new release with Jumpstart: Historic Horizons, a Historic Brawl queue, and preparation for rotation.

The updates and backend change will arrive on August 24, and all the new content unlocks on August 26. We are planning for four hours of downtime on August 24 to make all these changes (from 7 a.m. to 11 a.m. PT), and the MTG Arena status page will keep you informed as we go through this process.

We'll be back with another State of the Game prior to the release of Innistrad: Midnight Hunt, and in the meantime, you can keep up with all the MTG Arena news with our weekly updates every Wednesday on DailyMTG.