The future is bright, and for MTG Arena, only a few days away. By now, you've seen the cards, you've read the story, you've learned the mechanics, and soon, magic will truly meet technology as you'll be able to build, brew, and play with everything Kamigawa: Neon Dynasty has to offer—digitally, of course. Let's get you ready for your glow up, shall we? 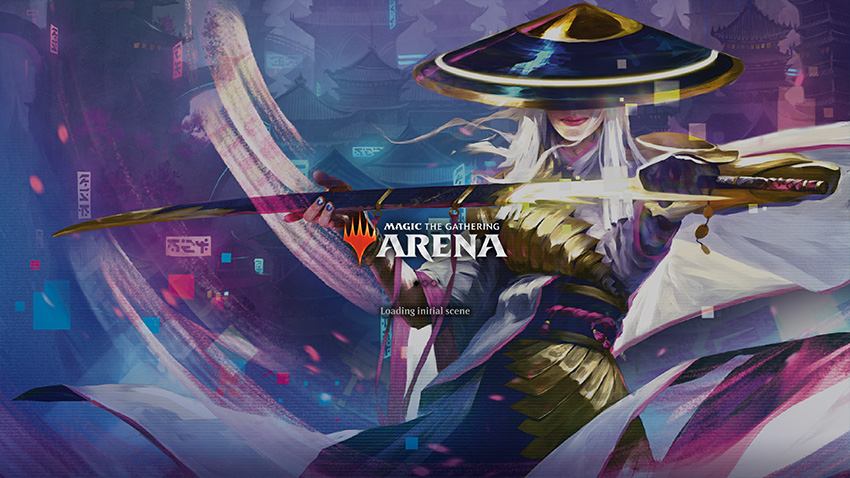 While the ever-illustrious Matt Tabak has already shone a light on the new abilities and game mechanics that await you in Kamigawa: Neon Dynasty, there is some extra information on how these bright and beautiful cards work on the technological marvels of modern computers and cellular phones. 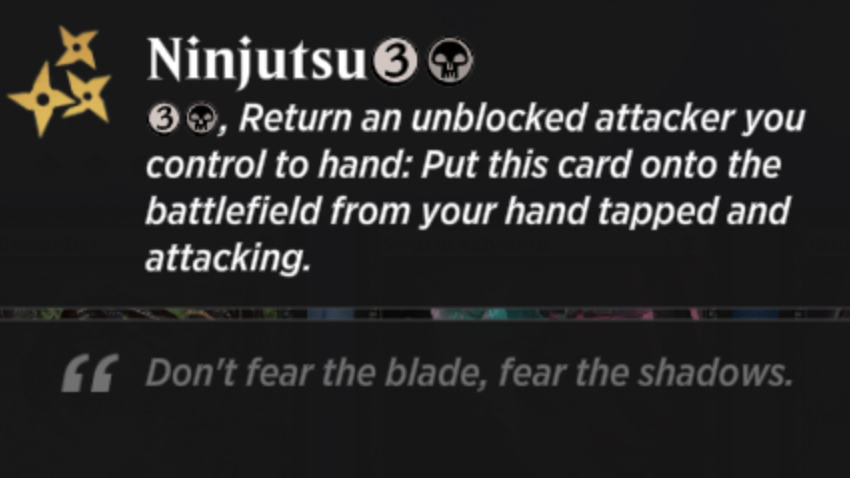 *Note: The cost to activate ninjutsu varies from card to card. The above example shows the ninjutsu cost from Dokuchi Shadow-Walker.

There are three very important things to keep in mind when using ninjutsu on MTG Arena. First, during the combat phase, we only put a stop prior to declaring blockers if your opponent has a creature capable of blocking. So, if you are attacking and your opponent can't block (e.g., they have an empty board), it will jump directly to the declare blockers step—that's when you'll want to activate ninjutsu! There is, however, an automatic stop after first strike damage but before combat damage if you can activate a ninjutsu ability then. Second, if you want to activate ninjutsu post combat damage for whatever reason, you'll need to enable manual priority controls.

Last, but certainly not least, you'll only see the visual effect (VFX) when you attack using a creature with ninjutsu if you can activate a ninjutsu ability!

In the simplest of terms, we no longer prompt you to choose an X value for parts of the card that don't explicitly use the X placeholder. For cards with an optional additional cost as part of their rules text (i.e., "As an additional cost to cast this spell, you may"), you simultaneously set the value when you chose the cards, and the additional cost will resolve automatically with the chosen cards when the casting cost is paid.

Using Torgaar, Famine Incarnate as our example, when you went to cast the spell, you set a value for "X" that would be the number of additional creatures you wished to sacrifice, and when the card was cast, you selected which creatures when resolving the cost. Well, now we have cards like March of the Otherwordly that combine an X cost with an optional additional cost, and that flow was just well, awkward. 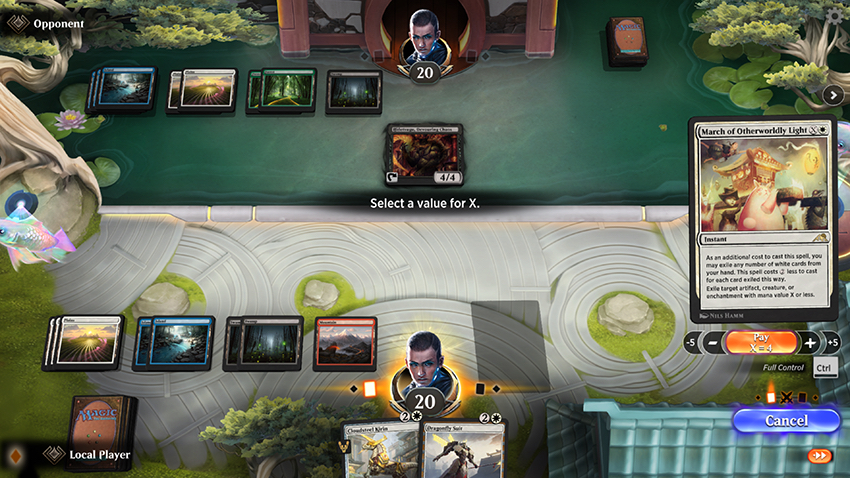 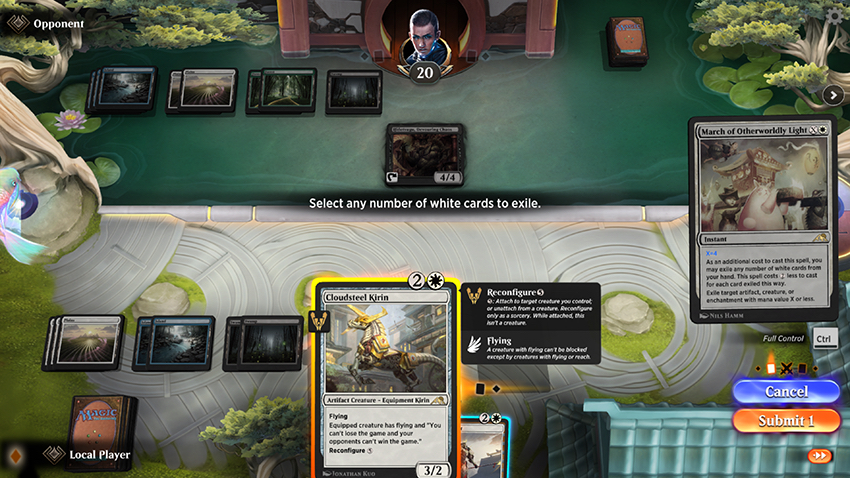 Trust us, it makes sense when you see it.

Now for the pretty stuff. Ukiyo-e lands? Check. Borderless treatment? Check. Phyrexian cards? CheckCompleat. If you've enjoyed looking at all the cool, colorful, and can't-resist collecting-ness of Kamigawa: Neon Dynasty, you'll be happy to hear that many of those amazing art treatments will be available on MTG Arena! While some of these card styles will be available directly for purchase either through the deck builder or by purchasing bundles in the store, others will be obtainable through in-game events, so be sure to keep an eye on our weekly blog updates for what will be available for when! 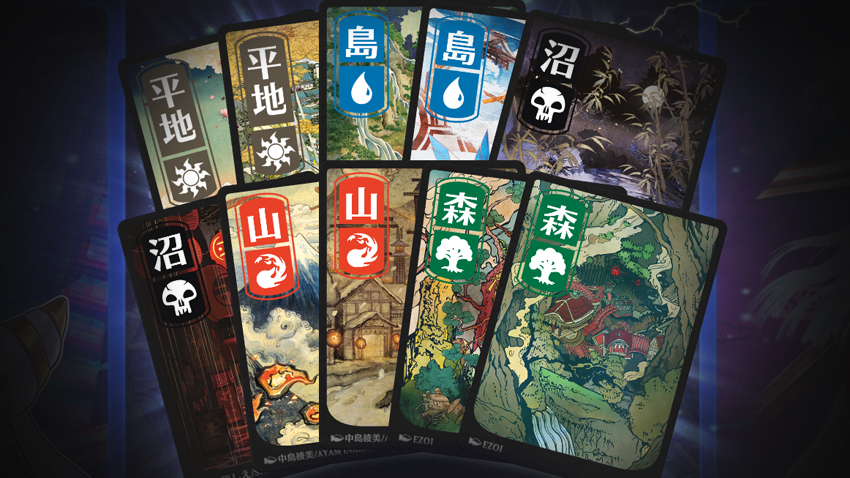 We do want to call out that the neon ink versions of Hidetsugu, Devouring Chaos can still only be found in Kamigawa: Neon Dynasty Collector Boosters or as a promotional card distributed by WPN Premium Stores. Similarly, since foil etching can only truly shine as a print technique, this treatment does not appear in MTG Arena. For more information on collecting Kamigawa: Neon Dynasty for tabletop play, you can head over to the dedicated article.

In addition to telling you what's coming alongside the release of Kamigawa: Neon Dynasty, we felt this was a good time to give an update on the current state of the new digital format we introduced in our December update, Alchemy.

First thing's first, players should expect our Alchemy: Kamigawa release sometime in the second half of March. It will feature approximately 30 new cards that will be playable in Alchemy and Historic, which is roughly the number of cards players should expect for Alchemy releases that accompany Standard sets.

We also want to disclose that the release date will be after the upcoming Neon Dynasty Championship, so these cards will not be legal for play during that event. We'll be revealing more about this Alchemy expansion, including a first look at some of the cards, on February 24, 2022, during Weekly MTG.

As for where things currently stand with the format itself, we designed Alchemy to appeal to highly active, digital-first players, and we're pleased to see that it's finding a good audience there. We've also received a lot of feedback about Alchemy's impact on Historic, especially with its use of rebalanced cards. This is something we're watching closely, and we want to affirm that we carefully consider the Historic impact when looking at what cards we want to adjust and how. Our goal with card rebalances is not to make any deck or archetype obsolete; we want players to be able to play the deck they want to play. This includes both giving some archetypes just shy of top-tier performance a little boost while bringing down the power level of some cards that appear in the most dominant decks. So far, the overall impact of rebalanced cards in Historic has been small, which is what we're looking for. Players with existing decks can still use them at the highest level of competitive play while allowing for more decks to compete alongside them.

We're also aware that by including Alchemy cards in Historic, MTG Arena no longer has a "true to tabletop" non-rotating format. We know this is something players want, and it's something we want to provide, so we're actively looking into how we'll support an additional Eternal format. However, we do not plan to add a separate Historic queue that would exclude digital-only cards or rebalances. Our goal with each format MTG Arena supports is to give players a unique deck-building and play experience, and having two formats that are slight tweaks of each doesn't fulfill those requirements.

Exactly what this upcoming format will be is still under consideration because we want to make the best informed decision that we can. That takes time. There are a lot of things we need to consider and solve before we have our answer, because a big part of supporting an Eternal format is setting it up for long-term success. Part of this does include incorporating player feedback, alongside working with our Organized Play team, and you'll begin to see some early testing of what this format could be in a few of our upcoming Midweek Magic events.

In short, we're happy Alchemy has found an audience, but we also hear your desire for a true-to-tabletop non-rotating format. We're working on it, and we hope you'll be patient with us as we decide on what's next.

The Future Is Now