The list of all banned and restricted cards, by format, is here.

The popularity of Deathrite Shaman decks has been a topic of discussion in the Legacy community for much of the past year. During that time period, Grixis Delver decks using Deathrite Shaman have been the most played deck on Magic Online, with other Deathrite Shaman variants among the next most popular decks. In recent snapshots of the environment, Grixis Delver showed a 55% (non-mirror-match) win rate against the field. At Grand Prix Birmingham, eleven of the top sixteen decks used four copies of Deathrite Shaman, including five of the Top 8. When the most popular deck in an environment is also among the most winning decks with a win rate significantly above 50% over a long period of time, we investigate.

Over time, we've seen a reduction in diversity of blue-based non-combo decks, with what were once more differentiated aggressive, midrange, and controlling archetypes condensing into a similar core of the strongest cards. Deathrite Shaman's powerful mana-fixing capability allows these decks to commonly play up to four colors, choosing from the most efficient cards in the environment. Its flexible abilities allow the decks to easily switch between aggressive and controlling stances, making them difficult to attack. Additionally, the incidental graveyard hate provided by Deathrite Shaman's abilities automatically protect against offbeat strategies like Dredge and Reanimator without requiring deck-building concessions against the rest of the metagame.

While a card seeing lots of competitive play doesn't by itself necessitate action, in this case we also see a reduction in diversity in the environment, an inability for the metagame to adjust, and a dominant strategy that's particularly hostile to rogue decks and innovation. For these reasons, Deathrite Shaman is banned in Legacy.

Gitaxian Probe is a subtle but powerful card that has previously been banned in Modern and restricted in Vintage. It's been a main component of the success of the two most played Legacy decks on Magic Online, Grixis Delver and Ad Nauseam Tendrils. Gitaxian Probe adds significant power to these decks and others by quickly filling the graveyard and counting toward abilities that require casting spells or drawing cards, without requiring mana investment.

In addition, the information advantage provided by Gitaxian Probe comes at too low a cost. We like that Legacy has a heavier focus on spellcasting and cards in hand compared to permanents on the battlefield, as this provides a different type of play experience compared to other formats that some players deeply enjoy. Gitaxian Probe undermines this philosophy by removing some of the psychological and bluffing aspects of gameplay, and gives proactive decks a strong advantage by knowing when and how to play around traditional answers to their strategies, like counterspells and permanent removal.

While Gitaxian Probe's impact on the Legacy environment hasn't necessarily reached a boiling point, it is a strong contributor to the success of many of the most popular decks. Because of the negative influence Gitaxian Probe has on gameplay as a free spell and low-cost information advantage, we prefer to remove it from the format rather than needing to weaken the strategies it facilitates in other ways. We've seen Modern end up in a healthier place without Gitaxian Probe, and it's time to take that step for Legacy.

In light of community discussion and the B&R changes made earlier this year, we'd like to take this opportunity to provide an update on Standard. Throughout the Dominaria season, we've seen quite a lot of evolution of the Standard environment over time, and we're generally happy with how the format has been progressing.

Early in the season, Grixis Energy decks rose to popularity, followed by White-Blue Control deck variants and then White-Black Vehicles. Black-red decks had breakout performances at Grand Prix Birmingham and Pro Tour Dominaria, which were then attacked by a resurgence in low-to-the-ground aggressive mono-red decks. Since then we've continued to see the metagame adjust.

While mono-red and black-red decks are the most popular decks on Magic Online, their win rates are in a normal and healthy range. Throughout the past several weeks, Mono-Red had a 49.9% (non-mirror-match) win rate and black-red had a 51–52% win rate (depending on the variant). Both decks have strengths and weaknesses against the other top decks with, for example, Blue-Black Midrange being effective against Mono-Red and White-Blue Gift a (slight) favorite against black-red decks. Those decks in turn have weaknesses, and so on. We saw that in effect at Grand Prix Pittsburgh and Singapore, where Blue-Black Midrange and White-Blue Gift decks returned to Top 8 competition.

Here are the win rates of the most popular decks on Magic Online Competitive Leagues, taken as a snapshot from mid-June. While these numbers can fluctuate from week to week as the metagame churns, they're representative of the ranges we've been seeing over time. Note that the decks are automatically clustered by archetype through a computer algorithm, not manually categorized. 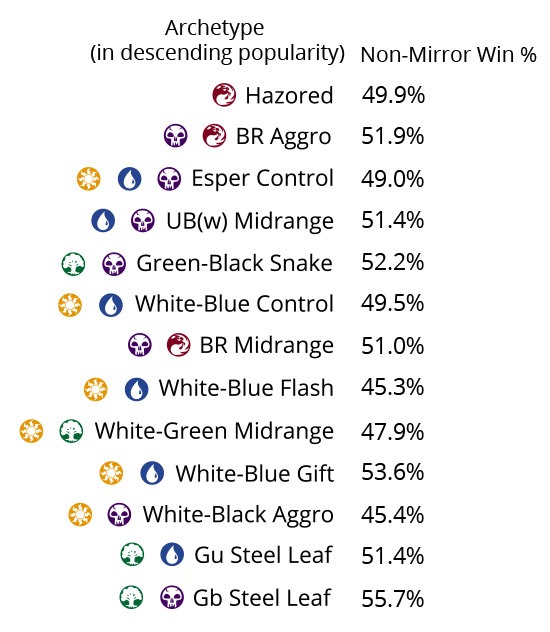 Monitoring these win rates and populations over time, we continue to see a shifting metagame even post–Pro Tour. Usually when the most winning decks aren't the most played decks, it's an indication that the metagame hasn't settled into an equilibrium state. At Grand Prix Pittsburgh and Singapore, we saw Top 8s with at least six distinct archetypes in the Top 8. White-Blue Gift, green Steel Leaf variants, Jeskai Control, Black-Green Snake, and others remain viable and important parts of the metagame.

On the topic of red aggressive decks, Goblin Chainwhirler has been contentious among the community recently. This cycle of triple-colored mana cards from Dominaria was designed as a deck-building reward for committing to a restrictive mana base. The catch is that mono-red was already one of the better decks coming into Dominaria, so there isn't as much of a concession made in playing Goblin Chainwhirler.

A lot of the power of current red decks comes from last year's cards—Hazoret the Fervent; Glorybringer; Chandra, Torch of Defiance; and Bomat Courier, as well as Abrade as an answer to strong artifacts. As those cards are entering their twilight in Standard, we anticipate the number of Goblin Chainwhirlers in the metagame will go down in the future. This in turn will open up more space in the metagame for decks that use 1-toughness creatures.

Meanwhile, the release of Core Set 2019 is bringing a set full of new tools to deck builders. While we don't necessarily expect any of these cards to singlehandedly crush red decks, the total package of new additions should shake up the metagame in general. In the meantime, there remain plenty of viable decks to choose from.

While there are no changes to other formats at this time, we do continue to monitor the health of Modern, Vintage, and Pauper. Across the board, those formats are looking quite healthy right now. We'll be sure to provide future updates as needed.