Modern Horizons 2 is no exception; it's a Melvin's delight, with fun mechanical references to sets from throughout Magic's rich history. We didn't neglect Vorthos, however. You'll see many familiar faces on legendary creature and planeswalker cards in the set. Most of these are straightforward attempts to express that character's powers or story through game mechanics. A few, however, go meta in their own ways, including today's preview card.

For as long as the game of Magic has existed, there have been various narrative expressions telling stories set in Magic's Multiverse. These stories have been told through a variety of media. Sometimes they are closely aligned to Magic card sets, and sometimes they stand alone, just using characters who have appeared on cards and putting them into situations that never appeared in card form. Wizards of the Coast has adopted a variety of strategies for producing and distributing these stories over the years. These days, the majority take the form of short fiction, published on our website, which takes place on the plane that the most recent Magic set depicts. Characters generally have a small suite of tightly themed magical abilities, like a superhero. But it was not always thus.

Richard Garfield, Magic's creator, set the tone for the earliest Magic fiction in the short story he wrote that was included in the original Magic rulebook. The characters are powerful wizards who battle each other by casting spells that are obvious matches of cards from early Magic sets.

This story was quickly followed by a series of comic books and a line of novels. Those early comics starred Jared Carthalion, who we saw in card form in Commander Legends. The star of Arena, the first Magic novel, was Garth One-Eye, a mysterious stranger with a secret past who blows into town seeking revenge. Here's a sample, where Garth duels a Planeswalker:

"Garth extended his hands and a living wall was erected before him, momentarily blocking the attack. Move followed countermove. A Lord of the Pit under the Walker's control emerged out of the ground and Garth, in turn, hurled it back upon the demonic hordes, destroying them, the monster roaring with delight as it rent the creatures and devoured them. A dark force of nature was next brought forth to tear the demon apart. Dragons fought in the sky overhead, doppelgängers stalked each other, hydras battled atop the wall, which came crashing down, and djinn struggled on the ground between the two fighters."

As you can see, the stories turn the game mechanics of Magic into fiction in the most literal way possible, which is a perfectly reasonable way to start out a line of novels based on a game. The narrative possibilities of this approach have their limits, however, so after the first few such novels, stories featuring more down-to-earth characters having traditional fantasy adventures became the norm.

As I considered various characters to create legendary creatures for in Modern Horizons 2, Garth One-Eye piqued my interested. As a character, Garth isn't very interesting; he's mysterious, he's edgy, he wants revenge. But, viewed from a certain perspective, Garth's power suite is very distinctive. Garth can cast any spell from Alpha, the first Magic set, because that is the only set that had been released when Arena was written, and as I said before, the style of the time was for characters to use spells in the fiction that were represented by cards in the game.

While I was helping to write the world guide for Dominaria, I read a lot of Magic novels as research. In fact, by the time that project was finished, I had read every piece of fiction set on Dominaria, including Arena. As I read that book, I had an inkling that it might come in handy to know which spells Garth cast. At the very least, it would give me some idea of what colors to make his card if I ever wanted to make a legendary creature card for him. Here's the list I wrote:

It looks a bit preposterous all written out like that, doesn't it? It's such a long list that it almost looks like a Commander decklist! Hmmm

My first approach to designing a card for Garth was to suppose that the above list was a Commander decklist (or, at least, the beginnings of one)! What would I need to write on a legendary creature to encourage a player to put those particular cards together into a deck? After some tweaking around, here was the version that I handed off to the Set Design team when I finished leading the vision design:

This design incorporated templating technology used in the updated Oracle text for the short-lived series of "expansion set hosers" printed in early Magic sets. These were City in a Bottle, Golgothian Sylex, and Apocalypse Chime.

This design had some pros and some cons. In the pros column, it certainly encouraged you to build the deck I had in mind. In the cons column, there was very little to recommend it for any other purpose. Also, 177 of the cards from Limited Edition (Alpha or Beta) weren't legal in Modern, which was a strange look for a card printed in a set called Modern Horizons 2. Additionally, as many people pointed out, the card just looked bizarre, like a silver-bordered card. Whether that goes into the pros column or the cons column I leave up to the reader.

The final straw for the design came when we ran the rare poll for Modern Horizons 2. This is a poll where Magic players who work for Wizards of the Coast look at all the rare and mythic rare cards in a set and rate them. Garth bombed the rare poll. Aaron Forsythe's Set Design team looked for a different direction for Garth. I won't keep you in suspense anymore. Here's what they came up with: 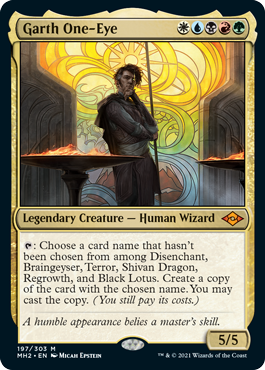 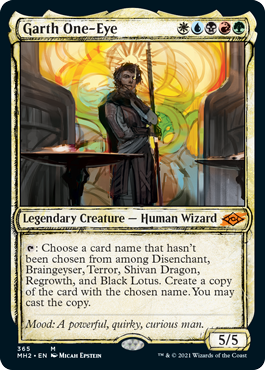 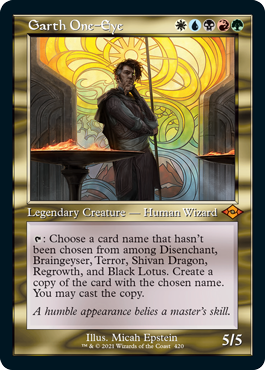 As you can see, Garth can cast six different spells, one of each color, plus a colorless artifact: Disenchant, Braingeyser, Terror, Shivan Dragon, Regrowth, and Black Lotus. Each of these cards was originally printed in Alpha. The card fulfills my original design intent: to reference a trend in early Magic fiction. And it still looks bizarre, like a silver-bordered card! Which is a pro, by the way!

Now, some of you may be thinking "those cards' names aren't all on the big list! Why were those particular cards chosen?" The simple answer is "fun gameplay." We wanted to provide a variety of effects that could be used in different game states. Need an answer? How about Terror or Disenchant? Short on mana? How does Black Lotus sound? Want to generate some value? Cast Braingeyser or Regrowth. Is it time to bring this game to a fitting conclusion? What could be more conclusive than a Shivan Dragon? While Garth may not have cast all these spells in Arena, I feel confident that he could have, had he needed to (or if his library had been shuffled differently?).

And if you want to build a Garth One-Eye Commander deck using nothing but cards from Alpha, you still can. Happy brewing!