Streets of New Capenna isn't kind if you're on the bottom. Without one of the families to lean on—or earn support from—it's hard to make it out of the worst corners of the city. It takes a rare set of skills and know-how, with more moxie and gusto than most can muster, to build something for yourself in a city where there's always someone ready to knock it all down.

But building his way up is exactly what Rigo did.

"The Brokers, for all their Park Heights exclusivity, never discount the strength of community or the knowledge that comes from the streets. Looking up, they say, is looking forward. Some of their best enforcers and contract mages come from strivers, kids out of the Caldaia and Mezzio who hustle to get themselves into the family and keep that drive with them to advance up the Brokers's ranks.

"Rigo was one of those kids. A street kid in the Mezzio, Rigo had dreams of working with New Capenna's angels. The Brokers were a close second, and so he hustled to catch the eye of Brokers recruiters. As a youth, Rigo built his own network of newsies, pickpockets, shoeshine kids, porters, and errand runners to help Brokers deployed to the Mezzio keep informed, stylish, fed, and paid under the table. He was successful and found himself quickly adopted by the Mezzio's Brokers. Advanced up the chain to the finer firms in Park Heights, Rigo never lost that striver's drive. Now a full-fledged Broker, Rigo never forgets where he came from: he volunteered to serve in the Mezzio, taking special care to look after the kids that remind him so much of himself." 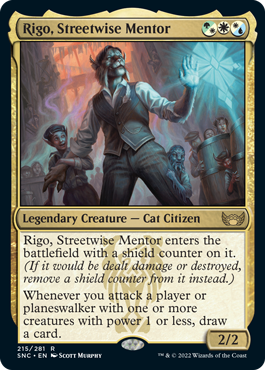 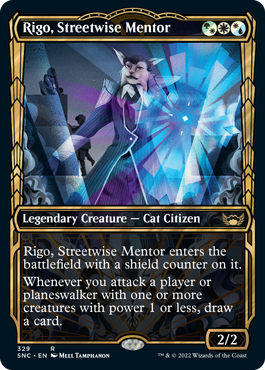 Rigo, Streetwise Mentor is the kind of friend you want in your corner. And if you think a soft spot for the quick-witted kids that share his childhood home is a weakness, you've got it all wrong (and kids are already taking out your ankles).

In Magic, Rigo is the kind of quiet creature that can eke out extra cards without giving much up. Sending a 1/1 creature across the way in combat—perhaps a humble Legitimate Businessperson—isn't particularly threatening, but drawing a card for the trouble is. In Commander, there are plenty of ways to make small creatures in general (plus make them unblockable, harder to block, or indestructible) and plenty of players to spread the attacks around to.

Of course, an opponent will get savvy and look to take Rigo out. Shield counters can stop a lot of the direct ways—it takes twice the usual amount of Murder to get the job done—but resetting the shield counter or dodging a bounce spell is just the kind of backup Rigo can use.

Rigo keeps a lookout for the little ones, and when they go to work for you, Rigo will keep the cards flowing.