After many years, the long-awaited fourth Un- set is upon us! Wait. I can't be the only one counting Future Sight, right? Let me start over.

After many years, the long-awaited third silver-bordered set is upon us! Unstable throws out the normal rules and delivers a set filled with crafty Contraptions, questionable science, unpredictable die rolls, predictable die rolls, high fives, and Squirrels. It would be impossible to capture every new mechanic in Unstable in one article. Instead, we'll go over the major mechanics in this article. There are plenty of cards that bring their own unique brand of wackiness. If you're interested in diving in deeper, we've put together a FAQ of sorts. It has a longer name. Lots of letters. We'll publish that once the whole set is revealed.

Here's how this is going to work: We're not going to show you everything right away. There are two main mechanics, and we'll reveal the second one when we're good and ready. Which will be Thursday. We'll update this very article on Thursday, so make sure to bookmark it. For fun.

Unstable isn't just random wackiness. It's very well-structured wackiness. There are five distinct factions fighting for your attention and deck slots. Each has a festive watermark to identify cards associated with that faction. The five factions are:

Several cards in the set care about the watermark on a card. These count not only the traditional watermarks found in a card's text box, but also the faction marks found in the bottom right corner of Contraptions. 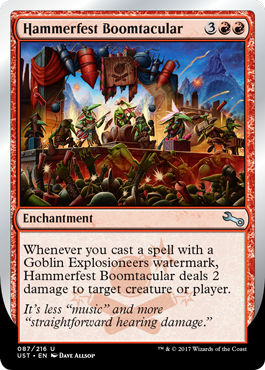 Wait, did I say Contraptions?! I'm glad you asked.

Back in what-is-perhaps-an-Un-set Future Sight, there was this card.

What were Contraptions? What did they do? There weren't supposed to be answers to these questions. It was an artifact type that meant nothing. It was a punch line in search of a joke. But with the release of Unstable, we finally have the answers. The faux-prophecy has been faux-filled. 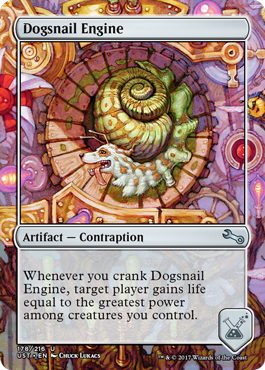 Each Contraption has a triggered ability that triggers when you crank it. And Steamflogger Boss tells us that at some point these Contraptions are going to be assembled. What does any of this mean? First, we need to talk about the Contraption deck and how to build one.

The Contraption Deck and How to Build One

Contraptions aren't put into your main deck. To play with them, you must build a separate Contraption deck. To remind you that they shouldn't be put into your regular deck, they have a unique card back. And as you'll soon see, this card back not only looks good, it has a job to do during your games.

In a Limited format, such as Booster Draft or Sealed Deck, your Contraption deck can contain any or all the Contraptions in your card pool. The fifteen-card minimum and the one-of rule don't apply. You can play whatever Contraptions you draft or open.

At the beginning of the game, shuffle your Contraption deck and place it face down nearby.

Now that you know how to build a Contraption deck, let's talk about assembling and cranking Contraptions.

Several cards in the set will instruct you or a creature you control to assemble a Contraption. Let's take a look at the back of the Contraption cards: 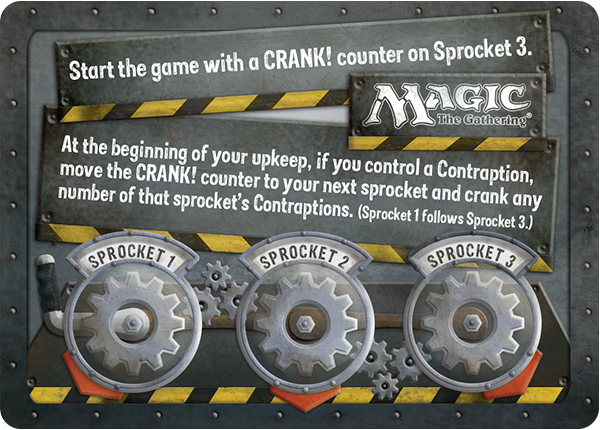 In some very unusual cases (and in this set, that's saying something), a Contraption will find its way onto the battlefield without being assembled. If that ever happens, the card either goes to the scrapyard if it's an actual Contraption card or it goes to the graveyard if it's not (for example, a creature card that became a copy of a Contraption).

Now that you have some Contraptions assembled, we need to get them to work. At the beginning of your upkeep, if you control at least one Contraption, you move the CRANK! counter forward one sprocket (so, from 1 to 2, from 2 to 3, or from 3 to 1). Then you can crank any of the Contraptions under that sprocket. This causes their abilities to trigger. You can put these abilities on the stack in any order. The ones put on the stack last will resolve first. Also, you don't have to crank a Contraption if you don't want to. Even if your Contraption deck runs out of Contraptions, your machine continues to work. Just put the CRANK! counter above the cards to keep track of which sprocket is going to fire next.

How you assemble your Contraptions determines what kind of infernal machine you're building. Load up one sprocket to produce a devastating turn every three turns, or spread them out to make sure you get something every turn? Assuming you have control over your own choices and aren't a puppet of a Squirrel regime, you have a lot of freedom.

Host is a new supertype found on several creatures in this set. On their own, host creatures are fairly unremarkable. They attack and block and do everything any other creature does. Let's take a look at one. 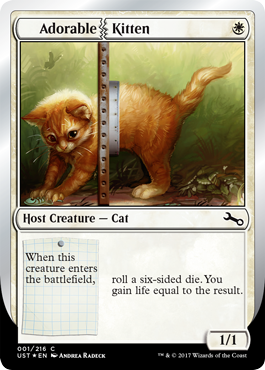 AWWWW. So adorable! Each host creature has an ability that triggers when it enters the battlefield. But host creatures have another thing in common. They can all be improved upon, thanks to the new augment ability. 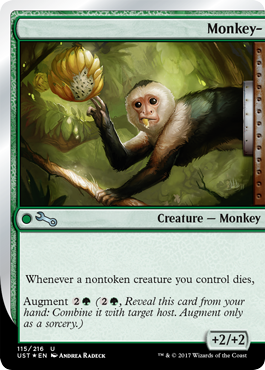 Creature cards with augment are quite remarkable. For starters, there's no mana cost. Creature cards with augment can't be cast. How to get them onto the battlefield then? Why, augment, of course. Augment is an activated ability you activate from your hand. To do so, reveal the card and pay its augment cost. This is usually mana but can vary. Choose a host creature as a target. In this example, I'll target Pickles. (I named the Cat Pickles.) Once the ability resolves, combine the two cards into one creature, like this: 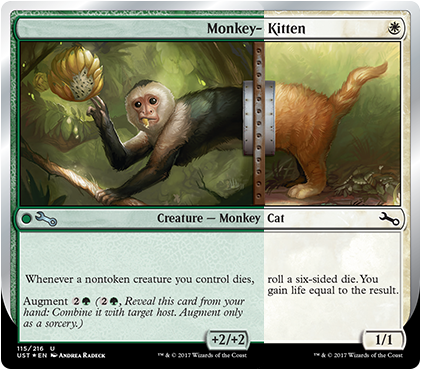 Augmenting a creature does all kinds of things. One way to think about it is just ignore everything that gets covered up. This roughly means everything to the left of the metallic bar in the art of the host creature. The combined creature will have a new name, type line, and text box. Notably, it changes the enters-the-battlefield ability by giving it a new, repeatable condition. And if sci-fi movies have taught us anything, being infused with another creature's DNA strengthens you. The power/toughness box of augment cards contains an adjustment to the host's values. Pickles the Monkey-Kitten is a 3/3 creature.

Once you've combined a host and an augment card, the resulting combined creature is a single creature for all game purposes. It attacks and blocks. You can sacrifice it or destroy it or exile it. (But please don't. Poor Pickles.) If it does leave the battlefield, both cards go wherever the creature goes. If it's put into a specific part of your library, you choose the relative order of the two cards. If an augment card finds itself on the battlefield not combined with a host, it heads to the graveyard. Even though an augment card can't survive on its own, it is a creature card. So if you cast a spell that lets you return a creature card from your graveyard to your hand, you could bring Monkey- back. Ooh, undead Monkeys!

Read each Unstable card carefully. Revel in its rules text. Savor its art. Drink in its flavor text. Bathe in its legal text. But most of all, have fun with it. I have to go now. Pickles needs her walk. Monkey-Kittens are so demanding.