Developer Note: We're experimenting with some of the ways we communicate with players, starting with sunsetting the current "State of the Games" as we separate the purely informational "what" updates from the more philosophical "why" discussions. MTG Arena Release Notes will focus on the "whats," highlighting the major content and new features arriving in the next game update. We're exploring ways to get players more involved in the "why" discussions, such as the recent WeeklyMTG focused on the ideology and goals behind Alchemy—so stay tuned for more details!

The war rages on, and more automatics and iconic characters are about to enter the fray! Alchemy: The Brothers' War introduces 30 digital-first cards to MTG Arena for play in Alchemy and Historic formats, allowing you to bring new tricks to the Standard battlefield, or pick one of the five(!) legendary creatures to take command of a Historic Brawl. 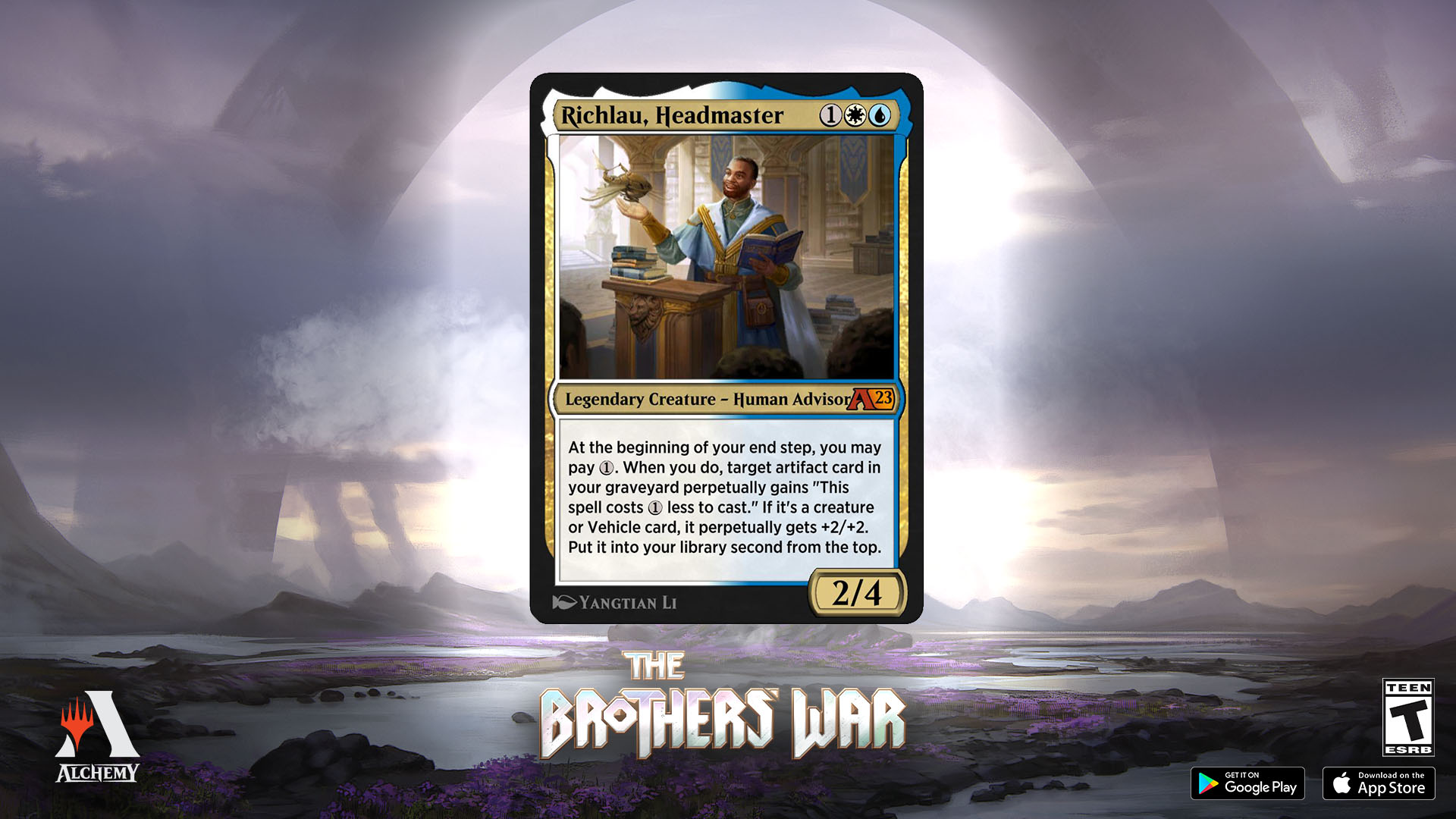 Players will be able to collect Alchemy: The Brothers' War cards in all the ways you've come to expect: participating in Alchemy events, crafting them via wildcards, or purchasing packs in the store. And yes, Alchemy: The Brothers' War packs will also help fill in the Golden Pack tracker for those of you who prefer to build your collection that way! 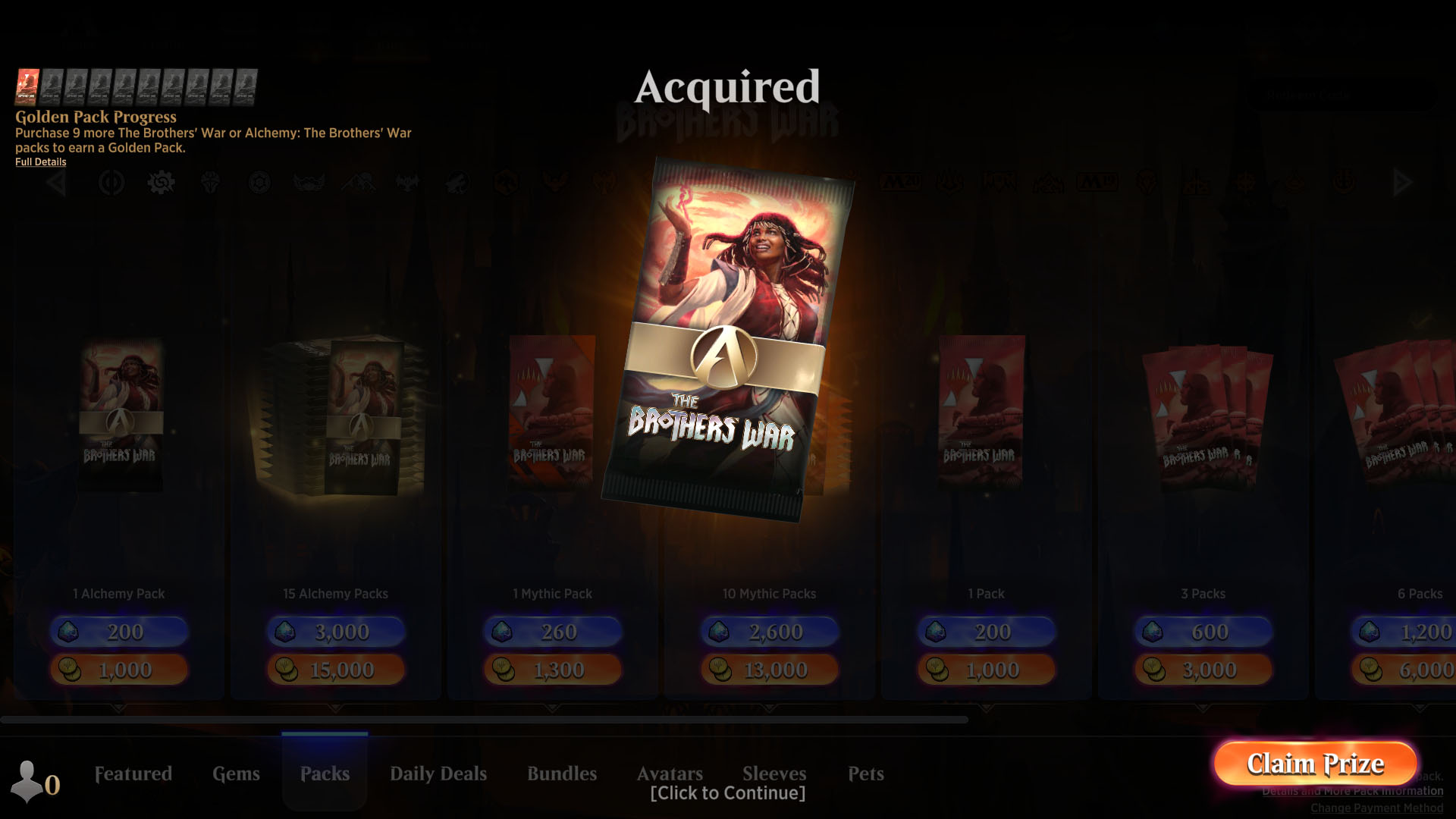 To celebrate the release, players will be able to claim six Alchemy: The Brothers' War packs from their player inbox (yes, this is new—more details below), with no code redemption or event participation required!

On a related note, we won't be holding a special Alchemy launch event for this set, so we combined the event rewards and the "play" code rewards into a single prize, and you'll be able to claim them in a whole new way.

Explorer Anthology 2 introduces 25 new-to-MTG Arena cards from Magic's recent(ish) history for play in Explorer and Historic formats. This latest anthology includes several Very Important Playables from the most popular Pioneer decks, including Nykthos, Shrine to Nyx and Soldier of the Pantheon, alongside other high-profile utility spells like Brave the Elements and Rending Volley. 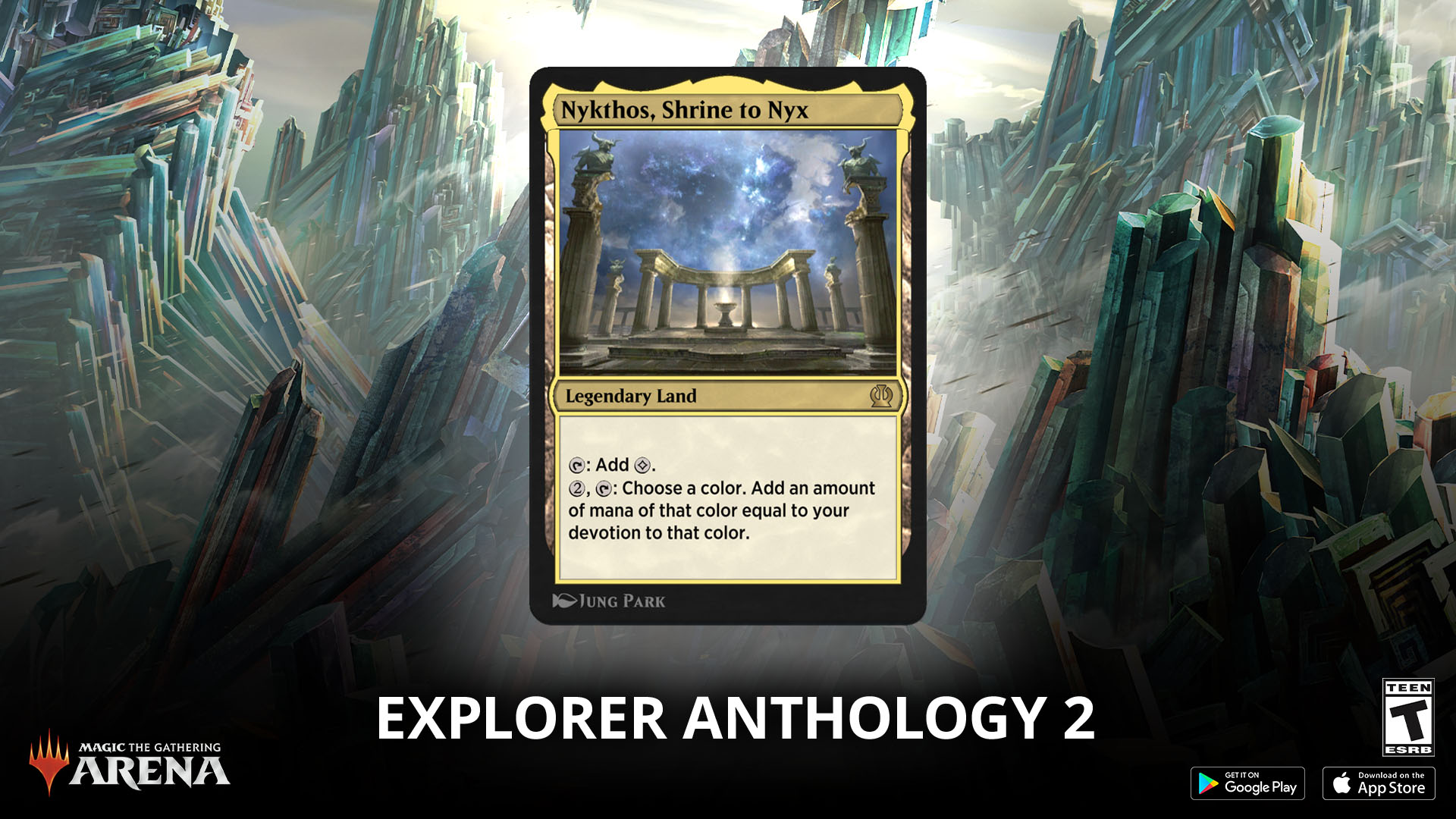 Alternatively, you can craft individual cards using a wildcard of the appropriate variety, and you will still be able to craft them once Explorer Anthology 2 leaves the store. As for the Wastes basic land, players will be able to claim their copy from their player inbox, which will allow them to add any number of Wastes to their decks.

Player inbox is a new in-game feature that will allow us to better communicate with players, such as providing important news and updates, qualification reminders for special events, and receiving promotional items and rewards without the need for a code—like the aforementioned Alchemy: The Brothers' War packs or the Wastes card from Explorer Anthology 2. 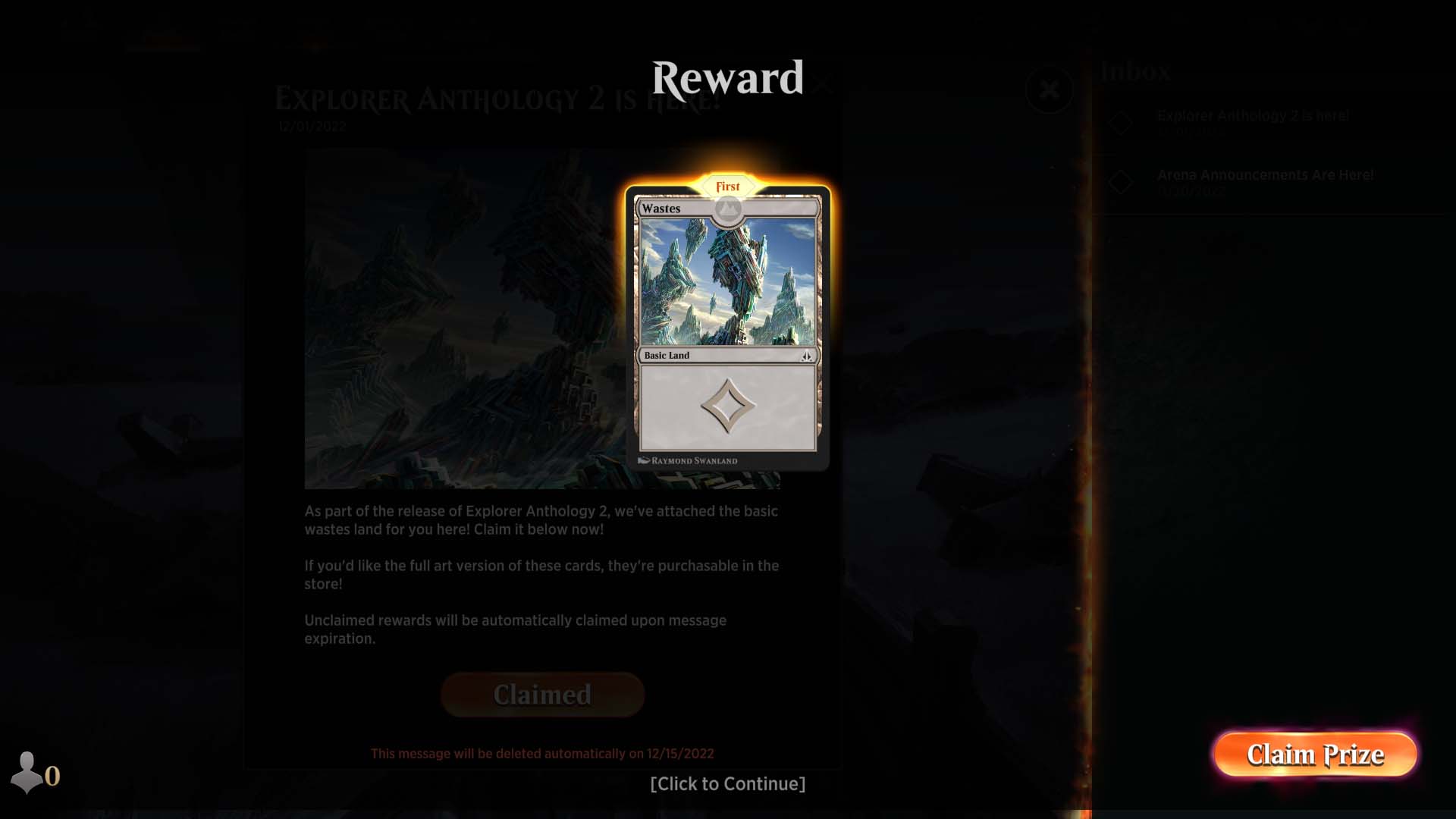 Players will be able to locate the inbox at the top right of their screen next to the "Learn More" button. The inbox will always display the number of unread messages, and messages within the inbox will have additional indicators such as "new" for unread, or a paperclip for messages that contain attachments. 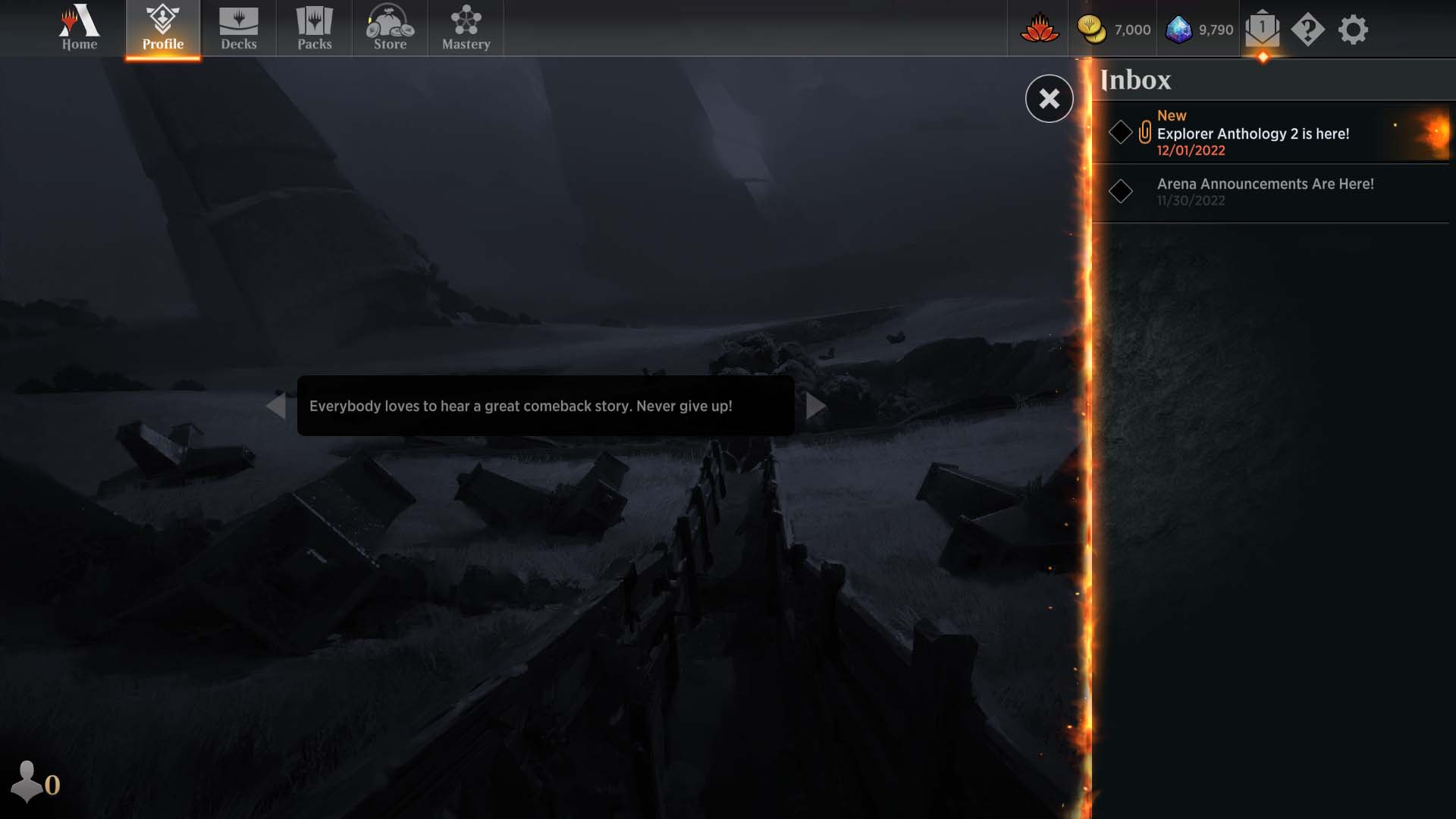 Each message will have a set expiration date, and messages will automatically be removed from the inbox once that date passes, with any unclaimed attachments added "silently" to your collection (you won't lose the items, however, you won't receive a notification that they've been redeemed). Currently, this feature is a one-way channel—you'll only be able to receive messages sent from someone at Wizards of the Coast.

Alchemy: The Brothers' War and Explorer Anthology 2 arrive on MTG Arena tomorrow, December 13. Keep an eye on our status page for the latest information and updates on maintenance times, and tune in to our weekly MTG Arena Announcements blog for the latest updates on in-game events and offerings.