The March game update is sure to put a spring in your steps and phases with new cards, new features, new events, and new ways to interact with your fellow players.

In case you missed it last week, we announced that we'll be adding 25 cards to MTG Arena as part of Historic Anthology II.

With Historic Anthology I, our primary goal was to open up the options for Historic decks to start bringing the greater breadth that a nonrotating format should support. We felt like this landed fairly well, with cards like Treasure Hunt and Soul Warden opening up some new archetypes for the format, and a card or two even ending up in highly competitive Historic decks.

For Historic Anthology II, we're still looking to do some of this expanding of possibility space, but we also know a lot more about the environment that these cards are going into. We worked with R&D to understand where we could add new cards to help counter any of the cards we suspended and which cards would work well to help build up the format for the remastered versions of Amonkhet, as well as Pioneer Masters, which we'll be releasing later this year. With Historic Anthology II, we're starting to build the bridge to that future, both in terms of power level and providing good answers and synergy pieces (such as cycling lands working well with Amonkhet, for example). We also wanted to bring in some nods to Theros with enchantment creatures from the original Theros block like Nyx-Fleece Ram and Brain Maggot as well as enchantment-themed build-arounds like Sigil of the Empty Throne and Ancestral Mask.

Finally, since Historic still has a lot of room to expand, we wanted to make sure to include some options that help more unusual decks or just bring on a nostalgic smile.

So, where can you play with all these news cards? We're glad you asked!

In addition to these events, players will also earn quest progress as well as Weekly and Daily Win rewards when using Historic decks in the general Play queue until the April game update next month.

Secret Lair Thalia: Beyond the Helvault

To celebrate the launch of Historic Anthology II, we're going beyond MTG Arena to bring you a special Secret Lair drop featuring the Guardian of Thraben herself, Thalia. What makes this drop extra special is that in addition to the Thalia-themed card sleeve, you'll also receive a card style for each of the new card illustrations for use in MTG Arena:

The March game update will also be bringing one of our most requested social features—the ability to message your friends in-game. 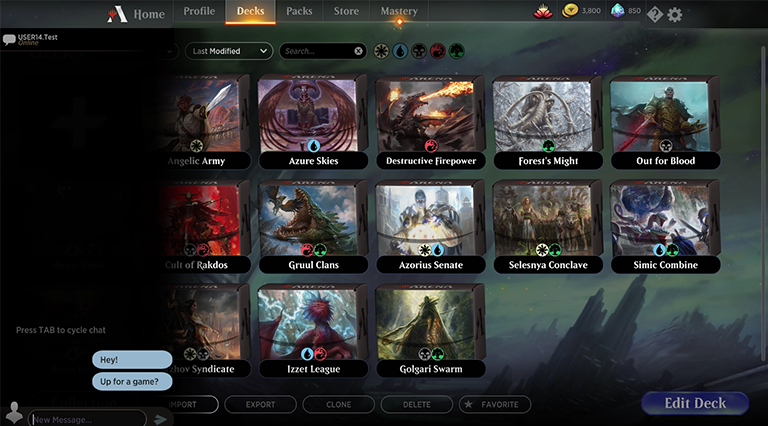 And to be clear—while you'll be able to chat during matches, you'll only be able to message players you're currently friends with! This feature will not allow you to message your opponent if they are not on your friends list.

And for those times when you should really be focusing on the current game state, we're also adding the ability to flag yourself as "Busy" or "Offline": 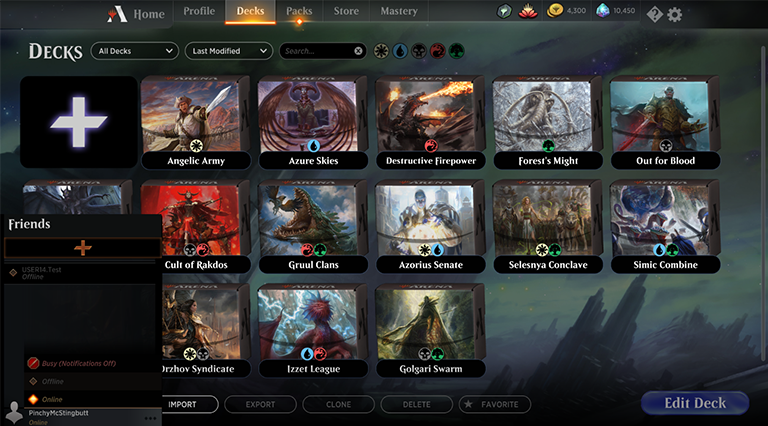 e think the header pretty much covers it, but just in case, let us elaborate: until the April game update, you'll be able to earn quest progress when challenging your friends in MTG Arena. You won't be able to use this to earn any Daily or Weekly Win rewards, but we thought it would be a nice way to celebrate the addition of direct messaging in-game.

We've once again gone back to the drawing board with our new player experience, and with the March update, we're adding a new way for players to learn the fundamentals of playing Magic: Color Challenges! We've written a full guide for players looking to learn more, but here's a basic overview:

One of the neat things about these Color Challenges is that if you lose one of the matches, you'll see a post-game tip that highlights the spells and combat tricks you have at your disposal: 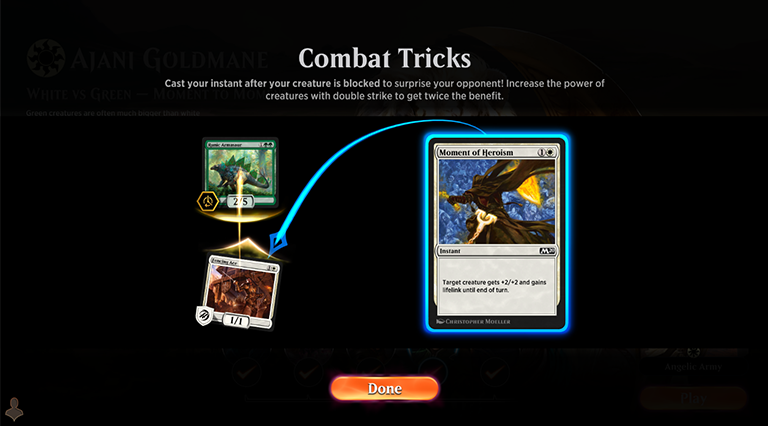 Ultimately, we hope these Challenges provide a better opportunity for new players to get a "feel" for each color of Magic and the different ways they play, as well as providing a more robust onboarding experience to those new to both MTG Arena and Magic in general.

We're also updating the card sleeve UX with this update, swapping to a multi-row, vertical scrolling format that will make it easier for you to scroll through all your options. You'll also be able to select a "default" card sleeve, which will be thedefault card sleeve for any decks you create (and will retroactively apply to any deck that is using the default card back).

And before you ask—YES! Favoriting lands is also on our to-do list. It's not a part of this game update, but it's one of those quality-of-life features we're working our way toward.

We're also adding some additional features to our in-game emotion options, adding two new dynamic responses for those of you who like to mind your manners: Thanks! And sorry!

Okay, first off—yes, we know a lot of you want Cube Draft, and yes, we want it too. Given our intended goals for Cube Draft with the cards and "pack" collation we intend to use, we don't believe it would be a fun environment for drafting with bots (so you can probably guess what we need to implement first).

In the meantime, Cube Sealed! 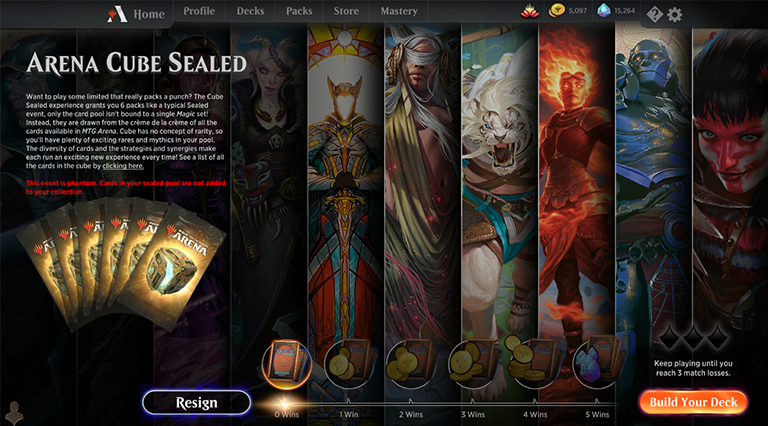 We'll be introducing Cube Sealed to MTG Arena in early April with our cube built from the cards currently available in MTG Arena, including Historic Anthology II. This is also the first time that we'll be holding a "phantom" event, which means the cards will not be added to your collection.

For those of you unfamiliar with phantom events, this means that rarity distribution doesn't matter and you may end up with a lot more than six rares or mythic rares in your Sealed pool.

We'll have more details (including the complete list of cards playable in the cube) later this month.

The game update is currently scheduled for Thursday, March 12—which is exactly one week from now. Keep an eye on our status page for the latest information on maintenance times, and be sure to follow us @MTG_Arena for all the latest and greatest updates.

And don't forget—Secret Lair Thalia: Beyond the Helvault will be available on March 12 as well for 24 hours only. Be sure to sign-up for the Secret Lair newsletter or follow @MTGSecretLair so you never miss a drop.