There's danger down every alley in Streets of New Capenna, with five families that have an insatiable appetite to own everything they can put their hands on—and then some.

If you can do more than survive but thrive—taking on the challenges and smashing through them each time—you'll ascend the ranks of a family in short order. Jinnie Fay did just that.

"An orphan discovered in the Mezzio by Cabaretti talent scouts, Jinnie Fay proved herself a skilled fighter in the service of the Vantoleone's guards. Her talent with blades caught the eye of Jetmir, who brought her on to his personal guard; she endeared herself to the old leonin, who looks upon her as a daughter he never had. Deadly, beautiful, and with a deep love for life's finery, Jinnie now lives as the heir apparent to the Cabaretti. In addition to being Jetmir's most loyal, trusted lieutenant, Jinnie spends much of her time managing the Cabaretti's vast kennels where expert menagerie-keepers raise rare breeds of urban wildlife and exotic teacup creatures.

"During the events of the Crescendo and the Adversary's War, Jinnie made an uncomfortable, often abrasive alliance-of-the-moment with Elspeth and Vivien to protect Jetmir, her adoptive father, from the Adversary's henchmen. Rebuffed in her efforts to steal Giada back from the planeswalkers, Jinnie now focuses on rebuilding the broken Cabaretti to their prior glory." 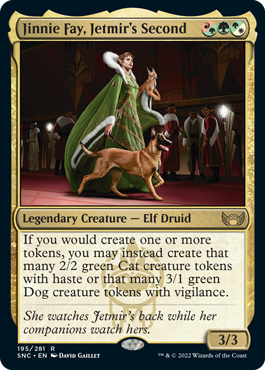 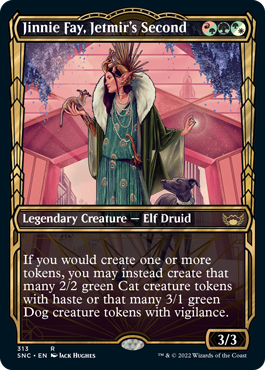 Jinnie keeps her family close and her companions closer, always with an eye for growing the Cabaretti along the way.

In Magic, Jinnie plays out by giving you an offer you're likely not to refuse. Classic Commander cards such as Rhys the Redeemed and Prossh, Skyraider of Kher can make a lot of tokens in a hurry. With Jinnie around, suddenly a pile of tokens can play out in different ways. You can always refuse her offer—say you're playing out Dragonmaster Outcast or Giant Adephage or Rampaging Baloths—but other cards pick up some excitement in considering it:

When the family has a deal, and it's as good as it looks, you take it and don't ask too many questions. Check back for more Streets of New Capenna previews here on DailyMTG soon!