In a sea of combo and aggro, one player is bucking the anti-control trend with his take on Next Level Blue, a green, blue, white deck that takes advantage of Tarmogoyf and cheap removal and counterspells to stall the game until a Sword of Fest and Famine or Vedalken Shackles can take over.

The concept isn't new, as anyone who is familiar with the "Next Level," Previous Level" and various other level blue decks that have taken advantage of a number of these cards over various formats.

What is new is Sheppard's willingness to run it through a format that pros nearly universally said was almost impossible to play control in. He's one of only a few control players still standing after Day One with a winning record in the format. Not counting the draft rounds, he has gone 6-1 in the first seven rounds of Modern. 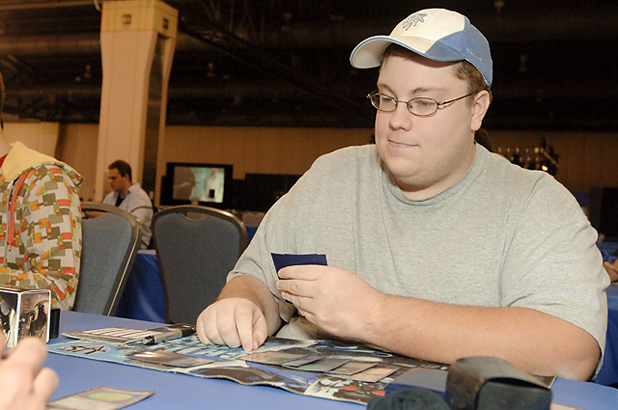 The problems with control in Modern are many, but first among them is battling Cloudpost decks, which can out-mana control decks with ease. From there, finding enough answers to stop fast aggro and combo decks while still retaining a way to win the long game is difficult without a good card advantage engine.

Enter Sword of Feast and Famine. Most of Sheppard's spells can be cast at instant speed, meaning the deck never has to tap out and can likewise make strong use of the Sword.

When he does tap mana on his turn, it's typically for Preordain, a spell which Sheppard said has been key to his run through the format. It lets him turn hands that may not be matchup ready into ones that have the right answers for the right threats.

In a fast, low-cost format, Spellstutter Sprite is "practically a hard counter" Sheppard said, and four Mutavults makes that the case more often than not. The man lands also happen to cheaply hold a Sword, though Sheppard did say they kept him from casting Cryptic Command on at least one occasion.

Sheppard said his matchup versus combo decks is very strong and the Zoo matchup is favorable, though Louis Scott Vargas' Blue Zoo did give him his only loss in the format. And while he has beaten a Cloudpost deck along the way to 6-1 through seven rounds of Modern, he said the matchup is "really rough" game one, and only about 50/50 for the match once he brings in the Spreading Seas, Aven Mindcensors, Flashfreeze and Bribery.

The deck is also weak to Punishing Fire, but Sheppard did manage to beat it one round.

His sideboard is built to give him a fighting chance against Cloudpost, but several other cards have been less than impressive he said. Sword of Fire and Ice was meant for the mirror, which he expected to see more of, and Krosan Grip was meant for the same, as well as some help against Splinter Twin.

He also added that the Relics of Progenitus should be Tormod's Crypt, and the fact that they weren't cost him at least one game.

The Standard port of Timely Reinforcements may raise some eyebrows, but Sheppard pointed out that the typical anti-Zoo technology of Kitchen Finks doesn't cover it when all of the Zoo decks are playing Path to Exile.

Sheppard said he's not sure what he would change, since the deck was built for this particular tournament, but pointed out the Mutavaults, Relics, Sword of Fire and Ice and Rune Snag had all underperformed or proved awkward at some point. For example, Sheppard said he would change the Rune Snags to Mana Leak and cut the number to three if Cloudpost continued to be popular.