This page is intended to cover double-faced cards in detail. As such, it repeats the basic information from the Innistrad Mechanics Article. If you're just looking for the basics, the Mechanics Article should have you covered.

Tens of billions of Magic cards have been printed, and until now, they all had one thing in common: the back of the card. Well, no longer. For the first time ever, Innistrad brings double-faced cards to Magic.

This article will walk you through how double-faced cards work. The information presented here isn't exhaustive, and may be expanded upon or superseded by updates to the Comprehensive Rules and Tournament Rules with the release of Innistrad. If you have questions that aren't answered here, chances are very good that they'll be addressed in those documents or in the Innistrad FAQ.

A double-faced card has two faces. It has no regular Magic back. Its front face, which is marked with a sun symbol and has a mana cost, is the default. A double-faced card always enters the battlefield with its front face up. This is true whether it enters the battlefield from the stack as the result of being cast, or from anywhere else, such as your graveyard (due to a card like Zombify, for example).

To put a double-faced card into your deck, you have two options: You can put your entire deck in opaque card sleeves, as many players already do, or you can use the checklist card provided in many Innistrad packs. 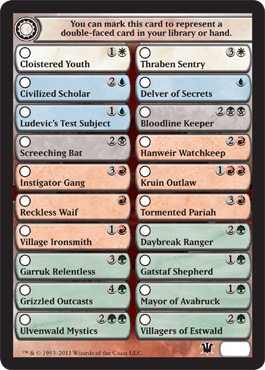 You'll use the checklist card any time it's important to keep the identity of your card secret—in other words, when it's in your library, in your hand, or exiled face down. You'll switch to the double-faced card when the card is on the stack, on the battlefield, in the graveyard, or exiled face up.

Due to their unique nature, double-faced cards work differently from other cards in Booster Draft.

As before, the faces of single-faced Magic cards are not open information, and revealing them or attempting to see them will result in penalties.

If any card or token other than a double-faced card is instructed to transform, nothing happens. It won't be turned face down.

Some of the most complicated interactions involving double-faced cards are with copy effects, such as Clone and Mirrorweave.

The only objects that can transform are cards that physically have two faces. If a token or a card with a regular Magic back is instructed to transform, instead nothing will happen. Even if a token or non-double-faced card is a copy of one face of a double-faced card, it can't transform.