Masters 25 is on the horizon, and it is packed to the brim with cards that bring good memories and nostalgia. That's well and good, but let's not forget about who's here to bail you out when you decide to draft five-color "good stuff," or play Constructed with decks that have greedy mana requirements. Say hello to the rare cycle of filter lands! 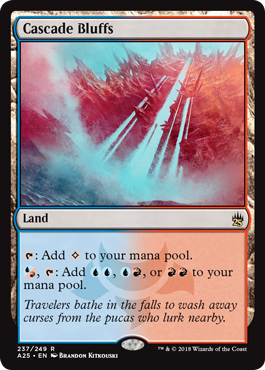 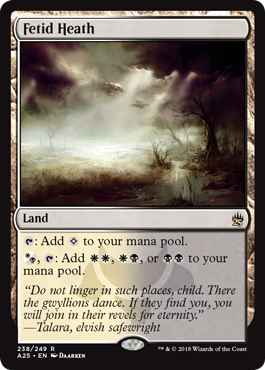 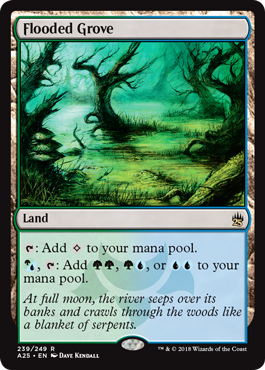 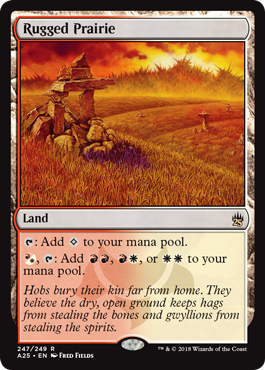 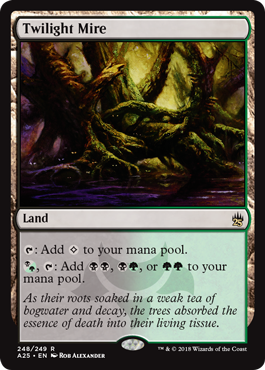 The filter lands are awesome. On their own, they only produce colorless mana, but as soon as you have one colored mana of either of the types each land produces, you're in business. Each of these lands takes one mana of two possible colors, and produces two mana in any combination of the colors that could be paid (e.g., Cascade Bluffs takes U or R to produce UU, UR, or RR).

This is big game, especially considering these lands don't come into play tapped, so the cost of having a filter land in your deck is relatively low, and the fixing it provides is very flexible. Of note, only the enemy filter lands in the cycle are being printed. Allied lands need not apply.

Back in the Shadowmoor/Eventide days, the filter lands let you go low on your number of colored sources to cast some real nice cards:

Unless you're only playing two colors, who has the colored mana to cast these? It's thanks to the filter lands that you can get away with casting double-colored and often even triple-colored cards with relative ease. You could even try splashing for a Doomgape if you're feeling frisky.

Arguably the sweetest thing you can cast with a Cascade Bluffs is Cruel Ultimatum.

Back when Shards of Alara was in Standard, it was common to see Cruel Ultimatum, Wrath of God, Cryptic Command, and Cloudthresher fighting side by side. They couldn't have done that without help from our pals Cascade Bluffs and Flooded Grove, because turning an Island into two green mana is an insanely powerful ability for a land.

Of course, Cruel Ultimatum hasn't vanished off the face of the earth, and is still fighting the good fight in Modern. Why win a fast match when you could slowly, but surely, crush your opponent's hopes and dreams?

Why You Gotta Be So Cruuuel

2 Lightning Bolt 1 Anger of the Gods

This deck aims to cast Cruel Ultimatum early and often, and has an appropriate selection of disruption to make sure that you survive long enough to make that happen. It's a blast to play, and if you've never had the pleasure of drawing three cards and making the opponent discard three (plus some other stuff), you really should give it a shot.

Of course, there is so much more than Cruel Ultimatum that these lands can be used for, and I expect them to see a lot of play in Commander and at kitchen tables around the world. Magic is just more fun when everyone can cast their spells, as greedy as those spells may be, and the filter lands let that happen.

What are you going to use these lands to cast, and is it sweet?

You can let me know on Twitter @gabyspartz, or on my stream at twitch.tv/gabyspartz. Enjoy!