Today, I'm thrilled to preview a card that is like a cake, in that it is totally sweet, like a care package, and in that there's a lot to unpack, like Earth's crust in that it's red hot? Point is, today's preview card is like all those things because it too has layers. There's the incredible art, the name, and the interactions and implications for Constructed play. Let's cut into this delectable layer cake and see what's inside. 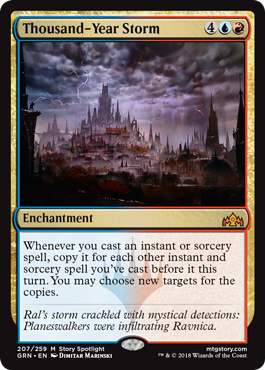 As with any slice of cake, I'm unsure where to start because I'm so excited about the whole thing. We'll start with the text box and what this enchantment does, since that makes the flavor and naming on Thousand-Year Storm even more enjoyable.

At first glance, Thousand-Year Storm comes at the steep cost of six mana and doesn't have any immediate impact on the board or on the game. Common wisdom says that for such an investment, there ought to be a really powerful return. Thousand-Year Storm delivers.

Building with Thousand-Year Storm presents an interesting challenge in that the enchantment wants cheap spells to get the ball rolling, but the effect will be most powerful with more expensive, high-impact spells. Thousand-Year Storm asks that we strike a balance between efficiency and power for the best chance of payoff. Aside from that, the possibilities are endless, just like all the spells you'll be casting.

I'm thrilled that Thousand-Year Storm will exist in Standard and Brawl at the same time as Opt. Opt is a one-mana instant perfect for your first spell of the turn. It eats up the minimum amount of mana, leaving you with at least five mana to cast your follow-up instants and sorceries. If you don't have another instant or sorcery in hand yet, Opt can help you find one.

Chart a Course is similar in that it's cheap and can find you more spells to cast. With the new Izzet mechanic jump-start joining us in Guilds of Ravnica, discarding to Chart a Course might still net you a spell. If you're in Grixis (blue-black-red), Walk the Plank and Cast Down are both very cheap removal spells that work well as first spells to kick-start Thousand-Year Storm, or payoff spells that, as your second or third spell of the turn, can handle your opponent's most problematic threats.

There are also a handful of powerful instants and sorceries with X in their converted mana costs. These allow you to select a value for X that uses what mana you have left over after casting your first or second spells of the turn. You could also cast them as your first spell of the turn using a minimum amount of mana to copy more powerful spells in your hand.

Banefire is the prime example that comes to mind. You can cast it for cheap to kill a small creature, then double your Divination (you can see where my priorities are). Later on, you can cast it after an Opt or Chart a Course and kill two or three big threats, or point all the copies at your opponent and kill them out of almost nowhere.

Of course, I've only touched on the Standard and Brawl implications above, because in Commander there are almost too many possibilities to fathom. Find the best mix of cheap and expensive instants and sorceries, and get ready for a wild game of Magic! I know there are dreamers out there who set their eyes on Thousand-Year Storm and knew immediately that they wanted to take all the turns in the world.

Izzet is a fitting guild for Thousand-Year Storm, because, like all the Izzet mages standing out under those roiling clouds trying to harness the lightning, it wants us to experiment and risk a little for the potential to gain a lot. Blue gets us card-draw spells, which will make sure we have fuel for our Thousand-Year Storm, while red's removal will help keep us alive until we're able to get the ball rolling.

On the off chance you haven't caught it already, I also want to point out the clever (and a little tongue-in-cheek) name of Thousand-Year Storm, which is one of my favorite touches. While Mark Rosewater and R&D have made it abundantly clear that we'll never see the storm mechanic again, Thousand-Year Storm is an echo of it. Thousand-Year Storm essentially staples "Storm" onto all of your instants and sorceries, and weaving this into the name is a flavorful and evocative way to pay homage to Thousand-Year Storm's powerful, if problematic, predecessor.

The icing on the cake is, of course, the incredible art. No cake is complete without icing, and no card is complete without art. Storm clouds roil above towering spires, and lightning crackles across the sky. A tiny figure stands on a ledge on the leftmost edge, either the source of the lightning or Ravnica's Ben Franklin, out there trying to harness it. The flavor text suggests it's Ral Zarek, the storm a piece of magic or the product, or perhaps byproduct, of some reckless experimentation.

The text also warns us of things to come. Planeswalkers are descending on Ravnica, and Thousand-Year Storm brings a sense of foreboding to this news. Not all of them can mean well

We have two days of Guilds of Ravnica previews left, so be sure to check out the Card Image Gallery to see all the latest cards. Then, pick your favorite guild, and get ready to tackle whatever awaits as we head back to Ravnica!