The main challenge I encounter when trying to play Magic in my off hours is that I can't play in sanctioned tournaments, so a lot of my Magic experience these days comes in two-player drafts. I continue to prefer Winchester draft to any other two-player Limited format. If you haven't had the chance to try it, I recommend doing so.

ost of the people in Magic R&D like playing Magic a lot. Many of us like drafting. Unfortunately, not being able to play in sanctioned tournaments or on Magic Online makes it hard for us to get our drafting fix. In order to get that fix, we sometimes play one-on-one Limited formats over lunch at restaurants.

For a while, my default one-on-one draft format was Winston Draft, which Aaron once used this very slot to write about. Unfortunately, Winston has a few problems.

Let's suppose that we have just begun a Winston draft. It's my turn to go first. I look at the first pile and see a Shivan Dragon. I dance in my seat, then pick the card. In a booster draft, I would have to pass thirteen other cards to one of my opponents, but here that's not the case. I'm up a ridiculous bomb, and my opponent's options are now the same as mine were, so there was no downside or balancing side effects resulting from me picking the card. 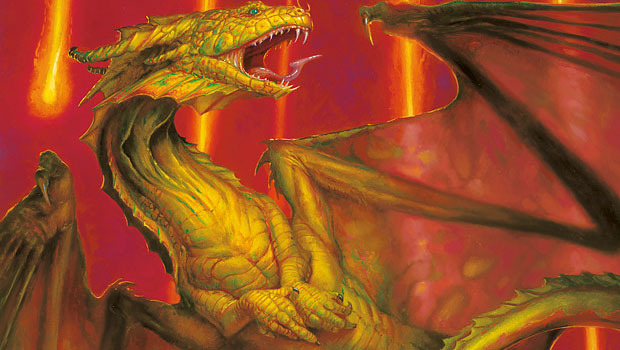 This effect is magnified in blocks like Scars of Mirrodin block that have a lot of powerful colorless cards. If I encountered that Shivan Dragon late in a Winston draft, I might not be playing red, but that doesn't matter if the card in question is Thopter Assembly or Contagion Engine. In that case, it's essentially a coin flip to see who ends up with the strong colorless card, and for Spikes like us, that's annoying over the long term.

It takes too long.

We usually play one-on-one drafts over lunch at nearby restaurants. When we Winston drafted, our food usually showed up about two thirds of the way through a draft, which is poor timing. We also didn't usually get back to the office in an hour. While playing Magic is part of our job, we're supposed to be doing it with unpublished sets we can still change, so this wasn't ideal.

I've been keeping my eye out for a replacement to Winston draft for a while now, and I recently found it. I was introduced to it by an article written by Paolo Vitor Damo da Rosa, who claims that Gabriel Nassif invented it. Paolo called it "Nassif draft," but Alexis Janson pointed out that it is to Winston draft what Rochester draft is to booster draft. Therefore, it was obviously supposed to be called "Winchester draft." We all agreed, and that's what we've called it ever since.

To illustrate how this works, I'll walk you through the beginning of a Winchester draft I did against Pro Tour Los Angeles 2005 finalist Billy Moreno, our most recent development intern.

Billy and I opened one pack each of Scars of Mirrodin, Mirrodin Besieged, and New Phyrexia, and each shuffled all the cards in our respective packs together without looking at them. This done, we each had a stack of 42 cards. 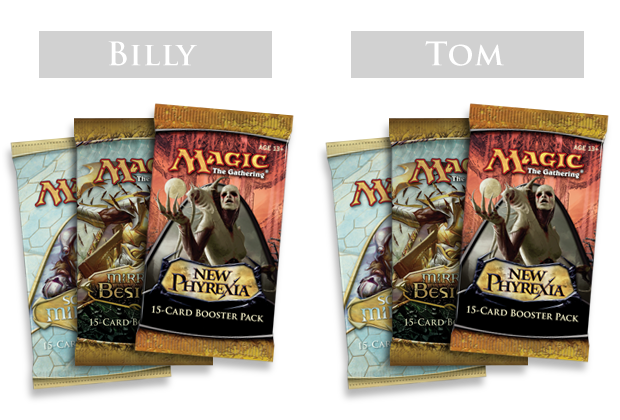 As a side note, you could also use any random set of packs you want, or a cube. I Winchester draft my cube fairly often, and I also now have a collection of bizarre Winchester draft sets that I got when VP of R&D Bill Rose cleaned out his office. New Phyrexia had just released in the company store, though, so that's what I wanted to draft this time. I was providing the packs, so Billy was happy to oblige.

We rolled a die to see who had the option to go first or go second. I won the die roll, and I chose to have Billy go first.

We each dealt two cards face up in front of us. The board looked like this. (We usually lay out the piles facing ourselves, but in these illustrations we've turned them sideways for readability.) 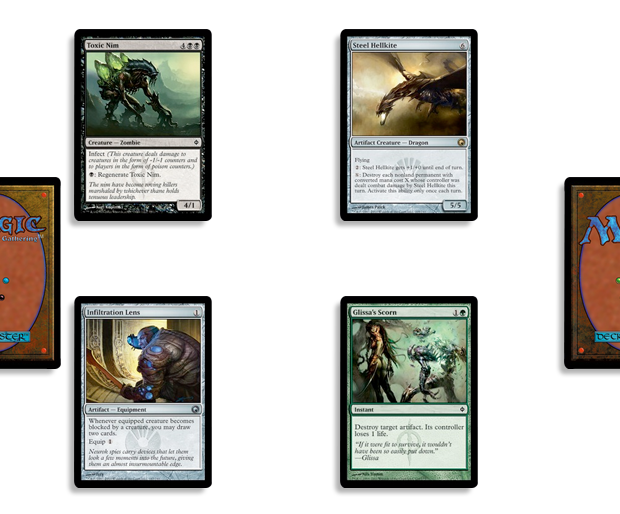 Each turn, the player whose turn it is drafts one of the four piles, adding all the cards in that pile to his or her card pool. I made Billy go first, which is awkward given the Steel Hellkite I flipped over. I guess that's what I deserved for min-maxing. Billy drafted the pile with the Steel Hellkite. 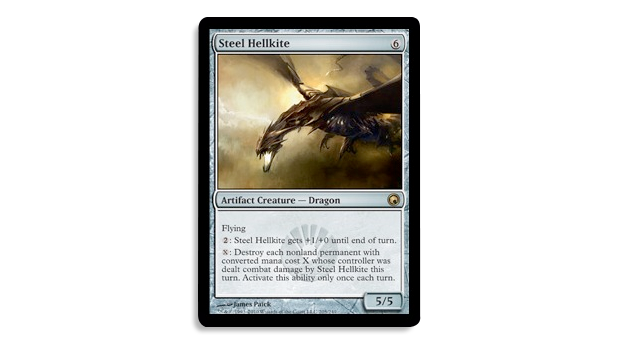 After the player whose turn it is drafts, each player deals one more card onto each of the two piles in front of him or her. 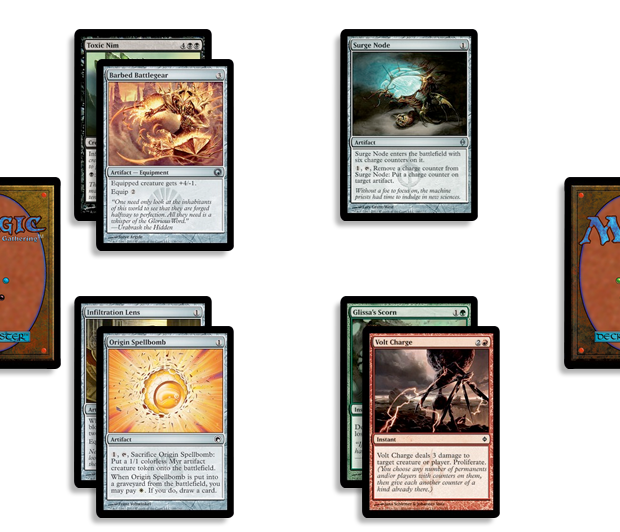 I like removal spells, and wanted to be able to kill Billy's Steel Hellkite. I drafted the Glissa's Scorn and the Volt Charge. 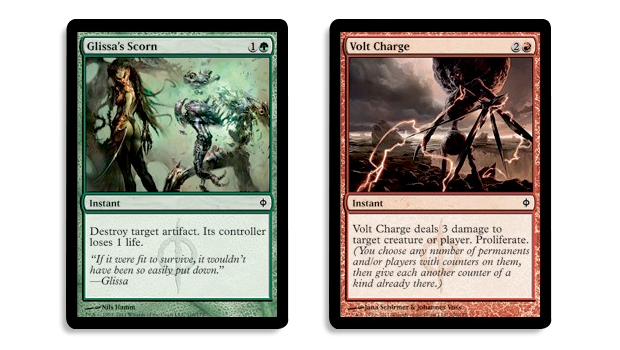 As before, we each added one card to each of the piles in front of us. 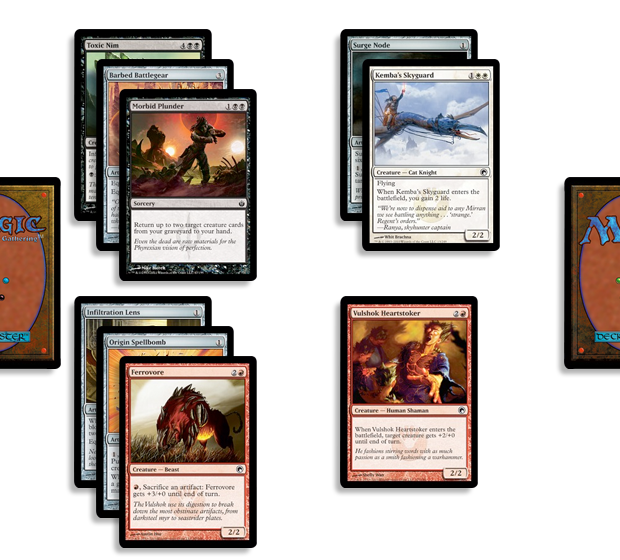 Billy decided that he wanted a second virtual Dragon, and took the pile with the Morbid Plunder. 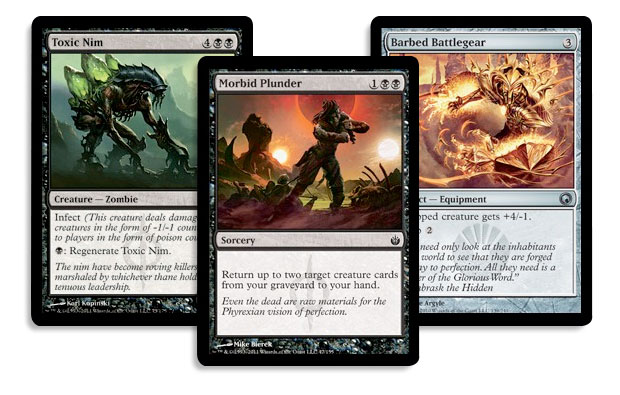 We each dealt out two more cards. 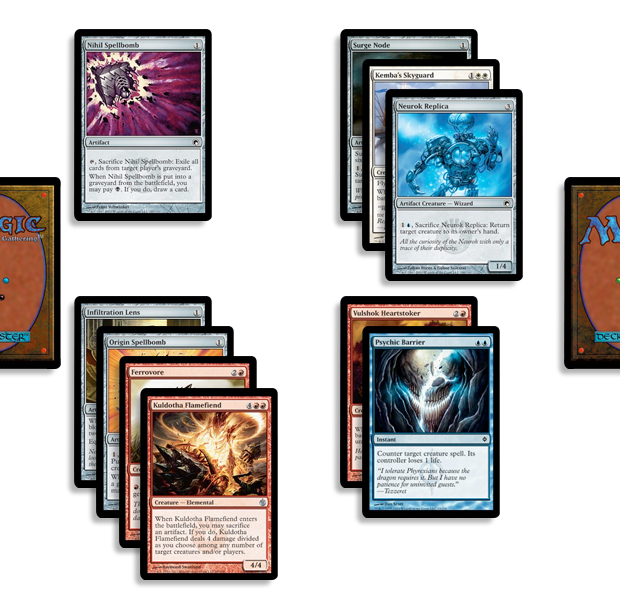 Kuldotha Flamefiend is awesome, and goes well with my Volt Charge. I took that pile. 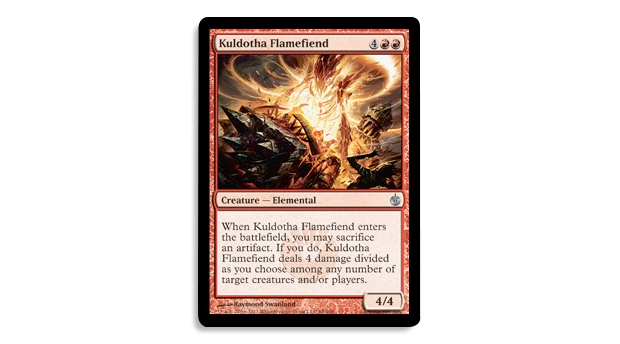 We continued like this until all 84 cards were drafted. Here are the decks we ended up with:


In the first game, we had a bit of a standstill that he broke decisively with a huge Bonehoard and a Bladed Pinions. In the second game, I wore him down with a Phyrexian Hydra, followed by a second thanks to Phyrexian Metamorph. Dealing with those got him low enough on cards that he couldn't break a stall while my Trespassing Souleater combined with my miser's Island ground him out. In the third game, I got a fast aggressive draw that I backed up with two removal spells and killed him before he got anything going. 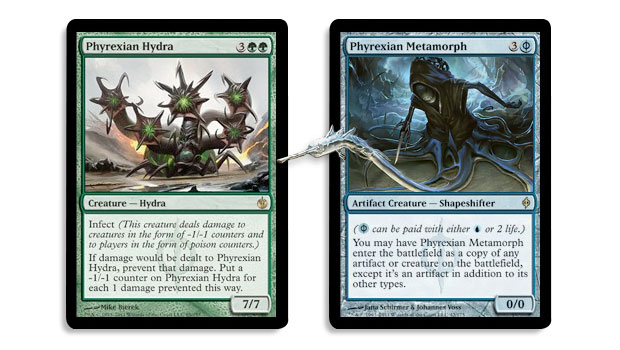 Magic developers lean toward being Spikes, so we like it when formats we make for ourselves are more skill-based. When you randomly "open" a colorless bomb in Winston draft, you get to take it with no downside. In Winchester draft, every time you draft a pile, more cards go onto the other piles, so your opponent's options are all potentially more powerful. Having more public information also increases the amount of skill in the format. Having a more skill-based draft is not automatically upside, as some players like more randomness, but inside Magic R&D, we like reduced variance when we test our skills against each other.

The decisions all feel important.

Many Winston draft decisions are about not taking a card. That may advance the draft, but that's not as exciting as actually taking a card. Every decision in a Winchester draft puts more cards in your stack, and that feels more important. 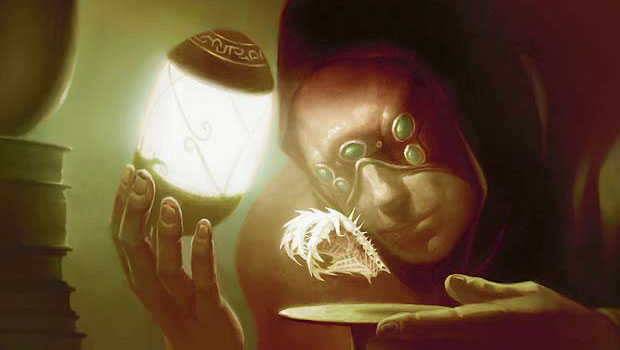 Because there are fewer decisions, a Winchester draft takes less time than a Winston draft to finish. In practice, that means that we finish the draft just about when our food arrives, so we can build our decks while we eat instead of having to awkwardly stare at plates of food while we continue to draft. Also, we usually get back to the office in an hour. We tend to draft and play pretty quickly, so your mileage may vary, but Winchester is a definite improvement in speed. 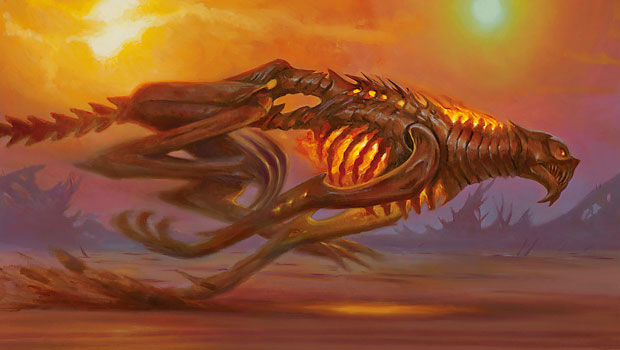 If you've never done a two-player draft before, you'll notice some differences between them and normal Limited. Generally speaking, two-player draft formats produce weaker decks than normal Sealed Deck or Draft play, and Winchester is no exception. You may find yourself stretching a little bit for cards, but that eventually becomes part of the fun. It also slows the format down a lot, which allows for occasional creative goofiness. For example, I did an all-Planar Chaos Winchester draft against fellow developer Zac Hill in which I splashed two Numot, the Devastators with two Dreamscape Artists, two Mountains, and one Plains in an otherwise blue-black deck. Despite the low power level, though, it's a lot of fun, and it's perfect for when you can't get to eight players.

Winston and Winchester are both fun formats. If you've never tried either of them, try them both, as I can't predict which one you'll like more. If you find yourself dissatisfied with Winston, though, give Winchester a try. We like it more, and I have it to thank for reinvigorating my lunchtime Magic habits.

My favorite Praetor is Elesh Norn, Grand Cenobite. I enjoy the poetry of her abilities, and I also enjoy poetic, powerful cards that I get to play with even if I want to win. In the Future Future League, I found that Elesh Norn was an excellent sideboard card in midrange green mirror matches, as well as an excellent random one-of in decks with creature searching cards like Birthing Pod. Playing one Elesh Norn also opens you up to randomly drawing it, which results in awesome stories most of the time you get to cast it from your hand out of nowhere.