has always been a showcase for a wide variety of strategies, but until recently players have had to contend with the restrictions that came with their mana bases. Playing two colors was easy, but more than that required a careful balancing act. Those days are over. There are still balancing acts, but now they are as likely to be actual copies of Balancing Act as they are to involve problems getting your colored mana. If you're only running two colors, a case can be made that you are being downright minimalist. 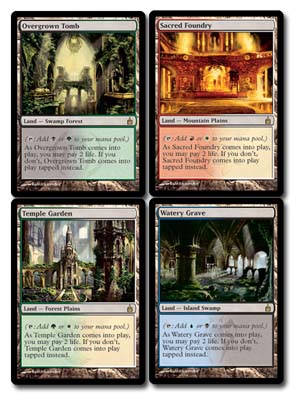 One reason for this is that mana has become a lot less endangered since Rishadan Port and Wasteland both rotated out of Extended, but the biggest development is the addition of the Ravnica dual lands, which has opened up a wealth of new options. On their own they represent great color-fixing for four of the ten color combinations, but they do so much more than that. lands don't count as basic lands, so they fix your colored mana but they don't interact well with other mana fixing. Sometimes they actively get in the way. Ravnica dual lands count as both basic land types, and sometimes that can be as valuable as the mana they produce.

Many players are using cards that seek out Forests, Islands and other basic land types to get Ravnica dual lands. Farseek is out there (so is Rampant Growth, for the Early Harvest combination deck) but the real highlight are the Onslaught Fetchlands. It might look like a deck such as Blue-green Madness would only be able to use the Ravnica dual lands to splash another color, but instead they get to do that for free while getting the dual lands they've wanted for years by playing Polluted Delta. Polluted Delta can get you blue mana by fetching Watery Grave and it can get green mana by fetching Overgrown Tomb. It can even get Island in a pinch. A player who was willing to pay the price in life could even use Bloodstained Mire as a blue-green dual land.

Dave Williams' deck is a prime example of the "anything goes" philosophy that is available to those who want it. He runs a beatdown deck that pulls the best cheap cards from four of the five colors together with Dark Confidant in way that would have been impossible before. He even gets to run Kird Ape despite not having access to a red-green Ravnica dual land.

You can even take this one step further. With the Ravnica lands keeping their basic land types after they hit play, the old Domain cards from Invasion block get a new lease on life. With only three lands you can have the entire Domain in play. There are control players using Collective t, but the most interesting deck may be the one that caused the dealers to be sold out of both and . Five points is a big effect for only one or two mana, especially when you can pump up Boros Swiftblade.

Affinity has always used its lands as more than just mana sources, and it continues to do so even as it grieves for its lost Disciple of the Vault and Aether Vial. The new lands are seeing use even here, allowing the deck to replace Disciple with Dark Confidant and play cards like Cabal Therapy without worrying about color at all. Extreme versions are getting their Meddling Mages into play with the mighty Terrarion. It is also the most dangerous mana base out there because of Kataki, War's Wage. With all the talk of Affinity coming out strong, there are decks that are using their newfound mana freedom to splash Kataki into decks that do not run any white spells.

Then there are those who are adding in white anyway. There are those who still use basic lands for their Goblin decks, but a lot of red decks are using the new lands to get the one drops and sideboards they've always wanted by adding white. With Bloodstained Mire, Wooded Foothills, Sacred Foundry and all providing both colors of mana the deck could even run colorless lands without running into trouble - and if it still had access to Rishadan Port or Wasteland it would certainly use them. Isamaru, Hound of Konda and Savannah Lions are not a problem. Those playing with just Mountains must feel like they are missing out on the party.

Traditional control decks that are using it to splash green into Psychatog or red into Blue-white control or Scepter-Chant got something they badly wanted but even they feel like they're missing out. The one deck that can play basic lands with pride is the Early Harvest deck. Early Harvest, Heartbeat of Spring and even Eternal Witness and Nostalgic Dreams let the deck recurse its spells as necessary to set up a game-winning Brain Freeze and Gifts Ungiven can find it anything it needs thanks to Nostalgic Dreams and Eternal Witness.

Balancing Act decks have been putting up good results on Magic Online for a while now, so it was no surprise to see the all-sacrificial mana base out in force at the first post-rotation Pro Tour. Looks can be deceiving, as their mana bases allow them to run almost anything - up to and including the mighty Dragonstorm - if they are so inclined. As always the deck can be fragile but also packs a lot of punch and certainly gets a lot of mileage out of its mana base.

Perhaps the most powerful land-based engine of all comes from another Ravnica card, from the Loam. Some Standard players are going so far as to use their second turn to discard it when their draws don't break their way just so they can dredge it back, but in Extended such desperate measures are unnecessary thanks to cycling lands. It is impressive what happens when these two cards get together: from the Loam becomes an AncestralRecall that you can get back whenever you would draw a card. Watch for an article by Mike Turian that examines all the new dredge engines out there today in more detail. Meanwhile, everyone needs to watch out for those few defiant souls packing Blood Moons and other hate for non-basic lands. Everything in Magic has its price.